‘You Go To The Sound Of Gunfire’: Retired Active Shooter Trainer And Border Patrol Special Agent 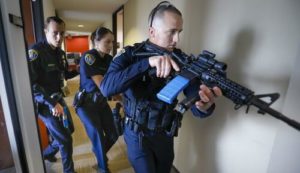 Authored by Charlotte Cuthbertson via The Epoch Times (emphasis ours),

For years he was part of the Border Patrol tactical unit called BORTAC, similar to a SWAT team, in the Uvalde and Del Rio region. His former colleague, an active BORTAC agent, fatally shot the suspect at Robb Elementary School in Uvalde on May 24.

Volcsko said an active shooter is one of the most dangerous situations a law enforcement officer can face and he didn’t want to speculate on the specific situation in Uvalde because he wasn’t there, but spoke to his training.

“The active shooter training is basically: We show up, and we go. If there’s shots being fired, we go,” Volcsko told The Epoch Times.

“You go to the sound of gunfire. It’s not a systematic clearing, it’s a direct-to-threat—that’s what it’s called.

“Somebody’s going to get shot in these scenarios—I mean, that’s the whole point of an active shooter. And when you are a law enforcement officer and your job in that situation is to prevent any more innocent people from being wounded or killed—then you’ve got to go. Hopefully everything turns out OK, but you’ve got to go.”

“The on-scene commander at the time believed that it had transitioned from an active shooter to a barricaded subject,” McCraw said.

Emergency call records reveal that several children called 911 during the siege and gunfire could be heard in the background of one call.

Volcsko said active shooter and hostage situations require different responses but his training dictates that in the former scenario law enforcement has to find a way in and neutralize the threat.

“If you’re met by a hail of gunfire, then you’ve got to work your way around and figure out another way. If that means you retreat and port a window and go in, OK. The doors are locked, we can’t get in, we don’t have the tools to get in, well, then we’ve got to break the windows and go in. Driving a squad car through the side of the building—when you have children being massacred inside of a building who gives a [expletive] about a $50,000 squad car? Drive it through the wall.

“Because every shot that’s fired is somebody either dying or getting wounded. You’ve got to go.”

Volcsko reiterated that every scenario is different and he wasn’t at the scene in Uvalde.

“As far as I’m concerned, if there was any shooting going on, and there was law enforcement there that failed to act for whatever reason, anybody that was there needs to turn in their badge and their gun, and they need to go away and hope they can live with the deaths of these children. That’s my opinion—not having all the facts.