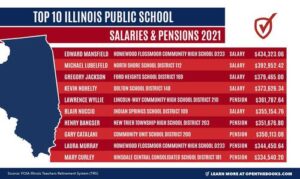 By Adam Andrzejewski of Open The Books substack

So, just who is making all of this money? 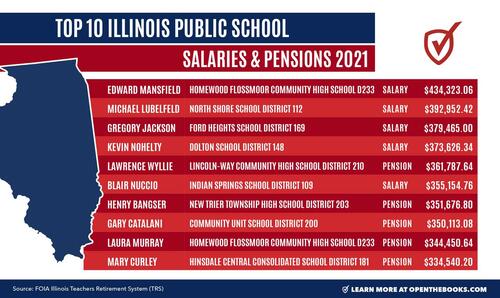 While crime skyrockets in the neighborhoods, test scores plummet in the public schools, and inflation decimates private-sector paychecks, the Illinois public employee class is living the good life.

Our auditors at OpenTheBooks.com found nearly 500 educators in the public schools with salaries between $200,000 and $439,000. In small towns, city managers made up to $341,300. Three doctors at the University of Illinois at Chicago earned incomes between $1 million and $2.1 million.

Use Our Quick Search Tool

Using our interactive mapping tool, quickly review (by employer ZIP code) the 132,188 public employees and retirees across Illinois making more than $100,000. Just click a pin (ZIP Code) and scroll down to see the results in your hometown rendered in the chart beneath the map. 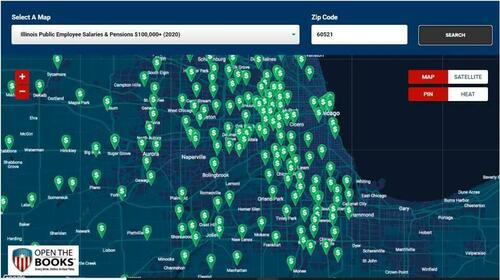 However, student scores plummeted. Just 26-percent of eleventh graders perform at grade level in math and seven in ten students could not read at grade level.

No matter, we found the average teacher in the Chicago Public Schools made $108,730 last year when including benefits. In addition, there were 1,823 employees across six departments – outside the classroom – now dedicated to diversity, equity, inclusion efforts.

Universities: Highly compensated employees included those that work for the University of Illinois Foundation—a private fundraising foundation for the university. A staggering 42 employees cleaned off nearly $7 million in cash compensation making between $100,000 and $294,700 each. The top-paid employee, Edward Wald ($294,700), out-earned the president at Northern Illinois University and every other state university (except Illinois State).

Gov. Pritzker appointed Cecelia Abundis ($147,500) as Director of Professional Regulations at the Department of Financial and Professional Regulation (IDFPR). It was an odd pick. Years ago, we exposed Abundis billing taxpayers for her 250-mile one-way “commute” from her home in Michigan to Chicago as she “managed” cases after she was promoted to supervisor in Attorney General Lisa Madigan’s office.

A court-ordered monitor, Dr. Stewart Pablo, was paid $321,500 by taxpayers to report on the barriers to access mental healthcare within the prison system – his pay amounts to approximately $1.7 million during the past five years.

Most local six-figure employees are in the police and fire departments. The top-paid local police officer worked in Deerfield, John Sliozis ($226,241) although the next five officers making more than $200,000 worked for the Aurora department.

There are several legal loopholes for individuals to access state funding through private associations, nonprofit organizations, and state legislative bodies.

Since Edgar left the governorship in 1999, we estimate that he earned $2.4 million in compensation from the University of Illinois (2000-2013) and another $2.5 million in pension payments from his career as legislator, secretary of state and governor.

Soon—It Could Get A Lot Worse

Two years ago, Illinois Governor J.B. Pritzker wanted to hike the income tax during pandemic and pushed for a state constitutional amendment to allow for a progressive income tax. However, the voters shot it down, 55-45.

This year, Pritzker is pushing Amendment 1 – which would enshrine long-term employment contracts for government workers, multi-year salary increases, constitutional backed lifetime pensions, the power to strike, and much more.

It would essentially make Illinois “unreformable.” A recent Wall Street Journal editorial by Wirepoints was headlined, “Unions Ask Illinois Voters To Sign Over Control Of The State.”

Already, updated analysis by the American Legislative Exchange Council shows that an Illinois family of four now owes two and a half times more in unfunded government pension liabilities ($168,000) than they earn in household income ($63,585). In a state of 13 million residents, every man, woman, and child owes $42,000 — on an estimated $533 billion pension liability for public employees.

Illinois may have already crossed the Rubicon. And now the public-sector unions are giving the state the last push off the cliff.

Note: all compensation amounts listed are cash compensation, or pensionable compensation and do not incorporate the cost of benefits, i.e. health insurance, etc., unless otherwise cited.