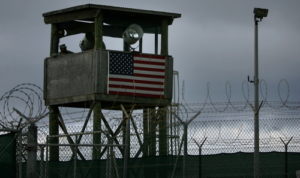 At a moment the US says it is nearing its longtime goal of closing the Guantanamo Bay prison facility which once held hundreds of suspected terrorists during the so-called Global War on Terror, the White House is mulling to expand the Migrant Operations Center located at the same US Naval base off Cuba.

In particular, the administration is looking at housing fleeing Haitians at Guantanamo Bay amid spiraling unrest on the Caribbean island-nation – part of a broader plan the US has been pushing for UN military intervention to stabilize the country as its government faces collapse at the hands of armed gangs.

The migrant facility is separate from the notorious prison for terror suspects and has been in operation for over three decades. It typically houses migrants intercepted by the US Coast Guard in regional waters and off the southern US coast.

But now it could serve as a crucial hub for US efforts to help stabilize the security situation in Haiti, as NBC describes:

The White House National Security Council is asking the Department of Homeland Security what number of Haitian migrants would require the U.S. to designate a third country, known as a “lily pad,” to hold and process Haitian migrants who are intercepted at sea and what number would overwhelm a lily pad country and require Haitians to be taken to Guantánamo, according to the document.

A series of National Security Council meetings have reportedly been held to focus on the emerging crisis over the last several days, as a new flood of Haitian migrants and refugees are expected along the southern US border.

It was actually mostly Haitian migrants present among the large caravan of some 12,000 which camped under an international bridge in Del Rio, Texas in September 2021.

We previously reviewed the chaotic and unpredictable situation in Haiti as follows:

Armed groups have sized control of several key trade and distribution hubs in Haiti, creating dire shortages in basic necessities, such as water, and even forcing a significant number of hospitals, businesses and other institutions to close their doors.

Haiti’s descent into chaos accelerated in July 2021 after the assassination of President Jovenel Moise. In the weeks following his death, then-acting PM Claude Joseph briefly took over as president, but was soon forced from power under international pressure after a bloc of countries led by the United States declared their support for Henry. The new leader reportedly has close ties to a suspect in Moise’s assassination, and even continued contact with him after the murder.

NBC says the Biden administration is bracing for the moment there’s a mass exodus from the island as the chaos spreads and resources dwindle, and as people grow more desperate.

Haitians are protesting their government’s request to bring U.S. troops into Haiti.

Haiti has been subject to foreign intervention at least three times. The last intervention brought a UN peacekeeping mission, which has since faced multiple allegations of abuse. pic.twitter.com/KSRPhRLxm3

“The Biden administration predicts that when the fuel is no longer blocked and migrants are able to buy gas to power boats, there could be a mass exodus of Haitians trying to make the dangerous journey to the U.S. by sea, the U.S. officials said,” according to NBC.