A dramatic video surfaced on Twitter of a Sikorsky UH-60 Black Hawk (once owned by the US) crashed during a Taliban training exercise in Afghanistan’s capital Kabul.

“An American Black Hawk helicopter, which was flown … for training, crashed due to a technical problem inside the campus of the National Defence University,” Ministry of Defence spokesperson Enaytullah Khowrazmi said, quoted by Reuters.

The video appeared on Twitter after the first anniversary of the Biden Administration’s disastrous withdrawal from Afghanistan. Biden not just failed to rescue every American but also left behind a massive stockpile of weapons worth billions of dollars. 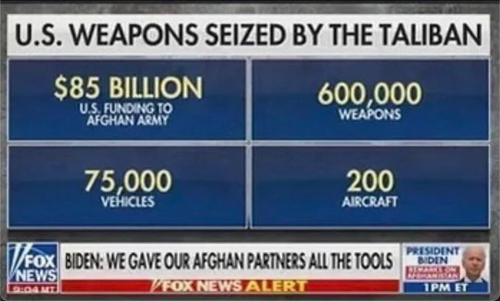 Video — The moment when a #Taliban black hawk helicopter crash in Kabul today.#Afghanistanpic.twitter.com/9BNj8X0Kfd

At least one of the 45 Black Hawks the Taliban seized has crashed. The status of the others is unknown. Here’s a complete list (via The Gateway Pundit) of the world’s most technologically advanced military weapons left behind by the US:

-2,000 Armored Vehicles Including Humvees and MRAP’s

-Pallets with Millions of Dollars in US Currency

Ukraine would’ve had a field day with these weapons…