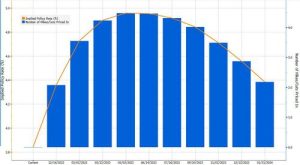 … and instead the opposite happened – as usual – with Powell signaling that the Fed would slow the pace of interest-rate increases, starting as soon as at its Dec. 13-14 meeting (read: 75bps hike are dead). While Powell did have his hawkish moments, like when he repeated that it’s likely that interest rates will need to go “somewhat higher” than what policymakers had forecast in September, he was more dovish than hawkish and omitted language from Nov 2 when he said that “we have a ways to go with interest rates before we get to the level that is sufficiently restrictive.”

And while we’ll get an update to those forecasts at the December meeting, which will likely show an uptick in that terminal rate projection, it will be below 5%, as Powell’s comments clearly hammered the terminal rate back under 5%. 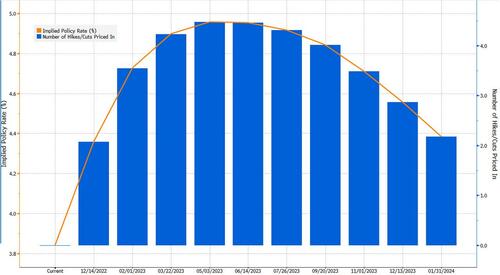 Powell also said Fed officials will be looking for “significant positive” real rates across the yield curve, among other asset classes, to assess how restrictive monetary policy is.

While the Fed chair discussed monetary policy, he talked extensively about the labor market, saying there are some early signs of a slowdown and that a “softish” landing is still possible. He said officials are concerned that workers may soon start demanding higher wages, which could have a more troubling impact on inflation.

And despite Powell’s saying that history has taught him “loosening policy prematurely would be a mistake” and that the Fed is going to stay the course until its job is done, stocks exploded when he echoed Brainard saying that “If you are waiting for inflation to go down, it’s very difficult not to overtighten.”

In response to Powell’s dovishness, the S&P 500 soared more than 2.1% as of 3:00 p.m. in New York, while the Dow Industrial Average added 1.3%; Tech stocks were the standout, with the Nasdaq 100 surging more than 3%. The VIX index of volatility was set to drop below 20.

Below is a snapshot of several Wall Street reactions to Powell’s comments.

“Powell said the labor shortfall — which he estimates at 3.5 million — mostly reflects early retirement, and there’s few signs these workers will return. He’s implying the unemployment rate will likely have to rise to cool wage growth, since an increase in labor supply is not forthcoming.”

“Powell has sounded more hawkish than the typical FOMC participant. Notably, he appears less confident than some in the November FOMC minutes that wage growth has cooled. He hinted labor supply is unlikely grow anytime soon, and the Fed will have to bring down demand or raise the unemployment rate to slow wage growth. This speech confirms our view that Powell is on the hawkish end of the FOMC spectrum — possibly more hawkish than the median participant.”

Jersey notes that Powell discussed when to stop the balance sheet runoff, and mentioned that at some point they will stop shrinking the balance sheet while allowing reserves to fall as other liabilities naturally climb adding:“The thing that eventually will need to happen is organic balance sheet growth. Everyone has seemed to forget the Fed used to purchase modest amounts of Treasuries every month — but these weren’t ‘large security asset purchases,’ they were just normal. Communicating this shift may be confusing to some market participants when the time comes. The Fed may need to consider starting to communicate this once they’re done hiking.”