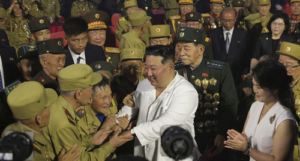 The US and South Korea are planning new war games where they will simulate taking out North Korea’s military leadership, including the country’s leader, Kim Jong-un, The Daily Beast reported on Wednesday.

The drills will simulate targeting Pyongyang’s missile and nuclear sites plus bases needed to supply them. Sources familiar told The Daily Beast that the war games will end with a “decapitation” exercise where they attack North Korea’s command structure and take out Kim.

According to the report, the US will not publicly acknowledge that they are practicing killing Kim in the war games. Washington and Seoul haven’t held such exercises since President Trump canceled them in 2018 after meeting with Kim.

The last time the war games were held was in 2017, and Kim responded by ordering an underground nuclear weapons test. The North hasn’t launched a nuclear test since, but the US is risking provoking one by simulating Kim’s assassination.

Secretary of Defense Lloyd Austin and his South Korean counterpart, Lee Jong-sup, agreed to restart the drills last weekend. When they were held last about 50,000 South Korean troops, and 20,000 US troops participated.

The renewed war games come after South Korea’s new President Yoon Suk-yeol said he would strengthen military ties with the US. His predecessor, Moon Jae-in, was a proponent of peaceful reunification with the North, and Yoon has said he will take a tougher stance on Pyongyang.

Yoon seeks the return of US nuclear bombers and submarines to South Korean territory. The US removed all of its nuclear weapons from the Korean peninsula in 1991.

Experts see a fiery speech this week by Kim Jong Un as a bid to cast an expected seventh nuclear test as a justifiable response to full-scale joint military drills by the U.S. and South Korea, which are set to resume within weeks.https://t.co/CBPywuMSs3

The Biden administration has maintained that it’s open to talks with Pyongyang but hasn’t offered any incentives to bring them to the table, such as sanctions relief. The North restarted launching missile tests last year, and the US has been warning that they may be preparing for a nuclear test.