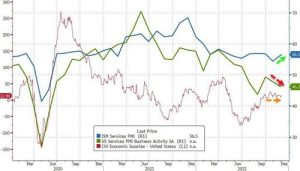 After the ugly manufacturing data, Services surveys suggests the pain in the US economy is spreading fast. US Macro surprise data has stalled in the last month and S&P Global’s Services PMI confirmed its flash print, falling from 49.3 in September to 46.2 in November. That is the fifth straight month of contraction in the Services PMI.

Of course, it wouldn’t be right if we didn’t get a farcical jump in the The ISM Services print just to “baffle em with bullshit”. ISM Services rose from 54.4 to 56.5 in November (well above the drop to 53.,4 expected)… 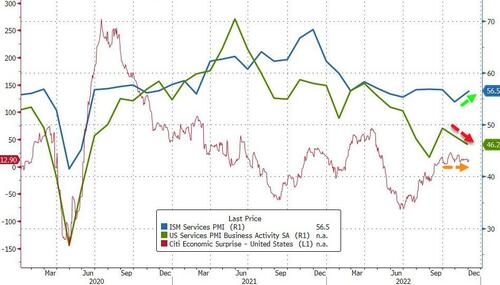 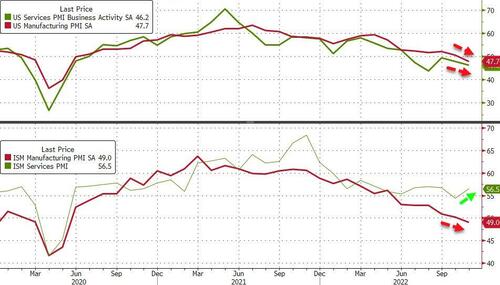 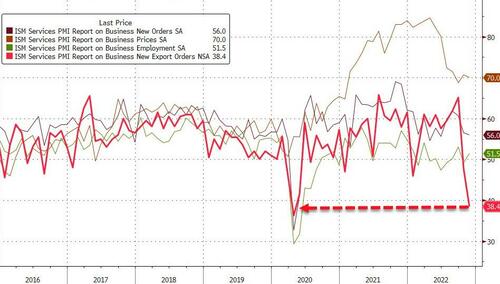 And somehow the ISM services jumped with 6 components weaker… 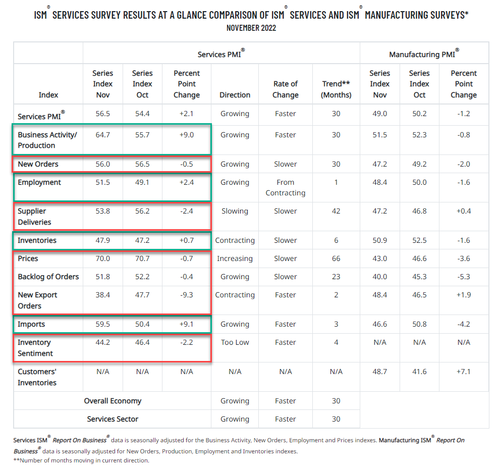 The S&P Global US Composite PMI Output Index posted 46.4 in November, down from 48.2 in October to signal a solid decline in private sector business activity. The fall in output was driven by a faster decrease in service sector activity and a renewed downturn in manufacturing production. 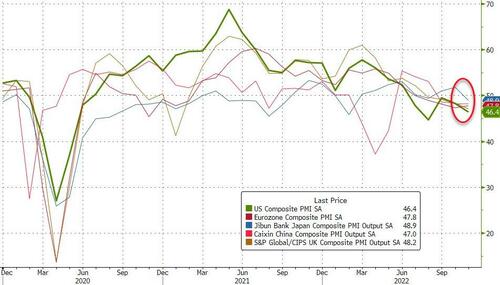 “The survey data are providing a timely signal that the health of the US economy is deteriorating at a marked rate, with malaise spreading across the economy to encompass both manufacturing and services in November. 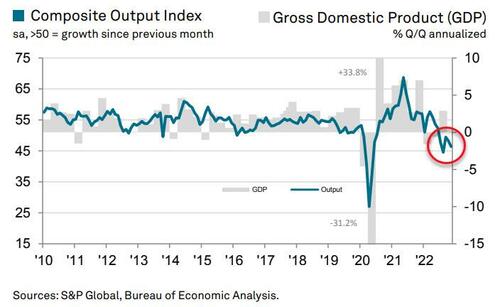 The survey data are broadly consistent with the US economy contracting in the fourth quarter at an annualized rate of approximately 1%, with the decline gathering momentum as we head towards the end of the year.

“There are some small pockets of resilience, notably in the tech and healthcare sectors, but other sectors are reporting falling output amid the rising cost of living, higher interest rates, weaker global demand and reduced confidence. Struggling most of all is the financial services sector, though consumer facing service providers are also seeing a steep fall in demand as households tighten their budgets.

“A striking development is the extent to which companies are increasingly reporting a shift towards discounting in order to help stimulate sales, which augurs well for inflation to continue to retrench in the coming months, potentially quite significantly.“

So it appears S&P Global analysts finally discovered the reverse bullwhip effect we have been discussing for months.