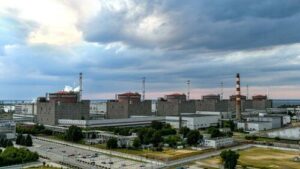 For only the second time in its history, the Zaporizhzhia nuclear power plant in Ukraine – which is Europe’s largest – has been fully cut off from the electrical grid, reportedly due to shelling. The past days have seen the plant repeatedly suffered complete disconnection from the power grid, with the plant’s back-up safety systems being activated.

“Ukraine’s embattled Zaporizhzhia nuclear power plant’s last working reactor has been switched off from the grid after the facility was disconnected from its last remaining power line due to shelling, Ukraine’s power plants operator said Monday,” AFP writes.

The shutdown was once again reported to be due to shelling, based on a fresh statement from Ukraine’s nuclear power operator Energoatom. “Power unit (reactor) No. 6 was shut down and disconnected from the grid” after a fire ignited that was “triggered because of shelling”.

Throughout the summer both sides have consistently accused the other of shelling and damaging the facility, after some 500 Russian troops began occupying it in March.

Just days ago, a UN-authorized visit by the International Atomic Energy Agency (IAEA) found that the nuclear plant is at risk given that the “physical integrity of the plant has been violated, several times,” according to a Friday press briefing given by Director-General Rafael Grossi, who led the team in person.

Grossi underscored that “The military activity and operations are increasing in that part of the country, and this worries me a lot.” At least two IAEA exports have stayed at the embattled nuclear plant on a “permanent basis” in order to monitor safety.

The primarily Ukrainian engineers which run the plant have maintained operations under the watch of the Russian troop presence. Zaporizhzhia supplies some 30% of Ukraine’s electrical needs.

Ukraine’s state nuclear operator Energoatom said that the last working power line at the Russian-occupied plant was disconnected as a result of a fire caused by Russian shelling on Sept. 5.

Meanwihle, Ukrainian President Volodymyr Zelensky in a Sunday interview with ABC News that Russia with using the site as a “nuclear weapon”…

Russia’s military presence at the Zaporizhzhya nuclear power plant, Zelensky said, is tantamount to Russia occupying “six Chernobyls,” referring to the site of a 1986 nuclear meltdown in Ukraine under the former Soviet Union.

He then underscored: “It means the biggest danger in Europe. So, they occupied it. So that is — means that they use nuclear weapon. That is [a] nuclear weapon.”

The Kremlin has claimed late last week a group of Ukrainian commandos tried to storm the plant from the river, but that the assault was repelled. The Russian side has also alleged Ukraine is attempting a ‘false flag’ operation at the plant in order to frame Moscow for some kind of disaster.