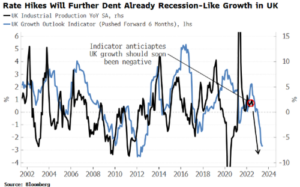 Unrelenting inflation pressures will keep the BoE hawkish, but rate rises will continue to imperil growth, further deterring the vast flow of foreign capital the UK needs to fund its current-account deficit. This leaves UK assets – bonds, domestic equities, the pound – more exposed from a macro-economic shock than they have been for decades.

Today’s UK “mini budget” has triggered a rout in sterling and gilts – sterling parity is now up to a 1 in 7 chance of happening by the end of the year (from over 1 in a 100 only a few months ago). A combination of huge government-spending pledges and tax cuts will require a significant increase in UK borrowing.

Lenders to the UK do not like what they see, yields are jumping and the currency is heading lower to a level that makes UK assets attractive to foreign buyers again – wherever that is.

On top of that, the BoE does not expect the energy cap will allow them to take the pedal off rate increases. Core inflation is now a problem, as the MPC noted Thursday. And although they did not mention it, the large rise in government spending will add to structural inflation risks. Energy cap or not, the BoE sees higher inflationary pressures in the medium term.

The BoE is now in an EM-like dilemma: surging gilt rates will add to weaker UK growth, with a recession looking increasingly likely. Yet at the same time the bank will have to keep raising rates to quell inflation, further destroying growth, making UK assets even less attractive. 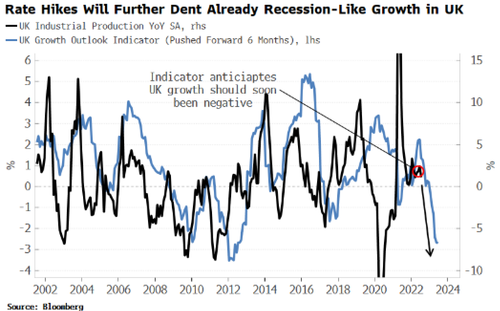 A country like Japan can manage this dilemma, with its huge net-creditor asset position and current-account surplus. But emerging markets are typically reliant on foreign inflows. The UK is in a similar position, with one of the largest current-account deficits in the world, and an already sizable budget deficit – set to get larger after today’s budgetary announcement.

The twin deficit (budget + current) currently sits at over £250 billion – a huge amount of capital that needs to be found every year. Fine in normal times, but when growth is weak and macro-economic volatility is elevated, it is deeply problematic.

With mounting reasons not to invest in the UK, this is becoming a gap that is becoming ever more treacherous to fill. The UK government and Bank of England need to think fast so that it does not lead to yet another sterling crisis.