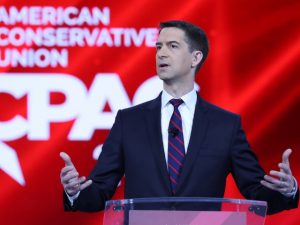 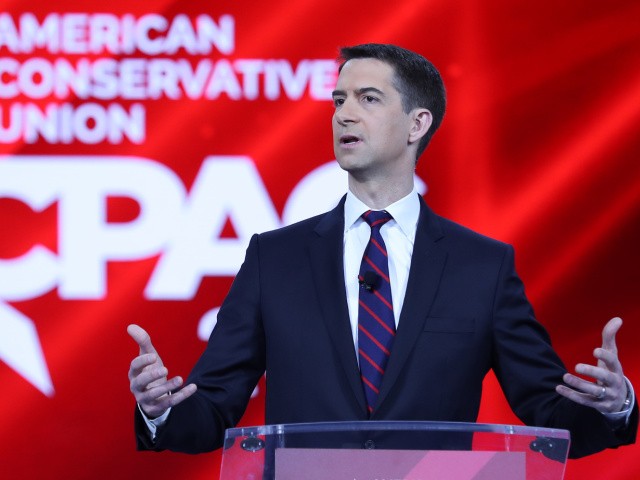 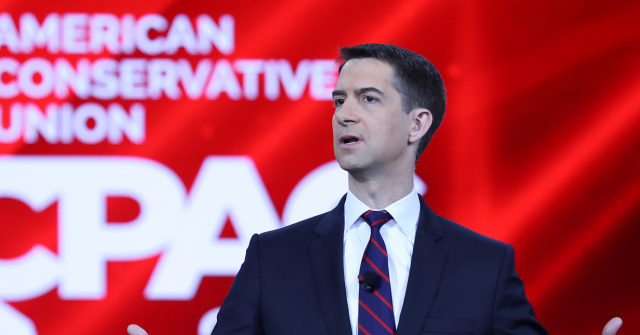 Sen. Tom Cotton (R-AR) on Friday mocked “social justice warriors” at the New York Times and their “meltdown” this summer over his op-ed in the paper calling for troops to restore order during the rioting at the time.

Speaking on the first day of the Conservative Political Action Committee (CPAC) in Orlando, Florida, Cotton recalled how hundreds of Times staffers were so upset their paper had published his op-ed that they forced an editor to step down. He said:

So I wrote an op-ed in the New York Times. It had a very simple message, a very common-sense message, grounded in American history and law supported by a majority of Americans, arguing: if the police cannot or especially if they are not allowed to restore order, then it is time to send in the troops.

What happened next? Total meltdown, of the little social justice warriors at the New York Times. All these children that have been marinated in the language of the campus seminar room, they said things like, ‘your words put my life at risk!’ As if typing on their phones sitting on their futons was as dangerous as being a cop trying to stop rioters in the streets! Or, ‘your words are violence!’

I’m sorry kiddo, words are words, violence is what your friends are doing on the streets of America…..My work didn’t meet their standards, it far exceeded their normally lousy standards.

He also criticized liberals’ attempts to tear America’s system down, saying it did not matter what they called it and that they just wanted to destroy it.

“When the mobs are tearing down statues of Lincoln and Grant, it’s not about the Civil War or racism: it’s because they hate America,” he said,

“Whether it’s a child mob at the NYT, or a social-media mob, or an actual mob in the streets, we will never bend the knee to a politically correct mob, ever,” the senator added.

Later, Democrats argued they needed tens of thousands of National Guard troops at the Capitol Building to protect them, after some pro-Trump protesters breached the building and engaged in violence.

There are currently more than 5,000 National Guard troops still at the building, at the request of the Capitol Police. The National Guard presence that began on January 6 and will last through at least mid-March and will cost nearly $500 million.

“I will never apologize for defending America,” Cotton said. “The New York Times is a laughingstock, obviously. But this is no laughing matter.”

Cotton also slammed Democrats wanting to control language, citing the Biden administration’s desire to ban the term “illegal aliens” and replace it with “undocumented non-citizen.” Cotton said, “Why are they undocumented? Because they are illegal!”

Cotton took aim at Biden’s immigration policy: “The Biden administration stopped the wall at our border and built a wall around your U.S. Capitol.”

“The Biden administration is literally tracking down illegal aliens in Mexico who Trump turned away and inviting them to return to our country—that’s not ‘catch and release’; that’s recruit and release,” he added.

“Immigrants who obeyed our laws and came here the right way, who earned their citizenship and earned the right to vote are some of our most patriotic and loyal Americans — people who escaped oppression from countries like Cuba or Venezuela or China.”