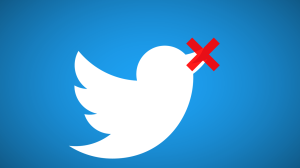 Parents Catch FBI In Plot To Force Mentally Ill Son To Be A Right Wing Terrorist – This is how they been doing it for yearsThe COVID19 Scam that Killed and Injured the World TimelineThe Deep State is as Real as Can Be – #DeepStateCrimes We now have Major Confirmations on FBI running the social media Networks Creating Terrorists and other Organized CrimesFBI paid Twitter $3.5M ‘to do its bidding’: Taxpayers’ money was used for ‘processing requests’ from the bureau amid Hunter Biden censorship scandal – as anger grows over secret state censorship of the American people

Another day, another TWITTER FILES drop exposing the incestuous relationship between big tech and government. 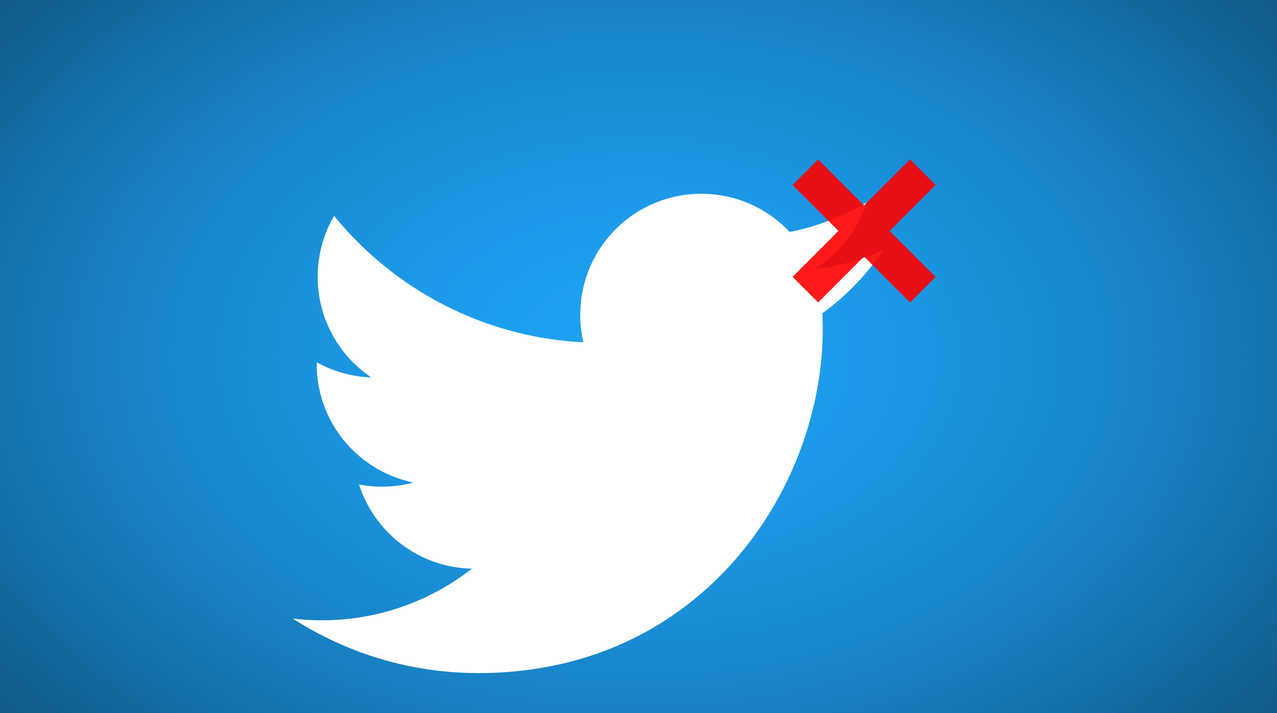 Today’s edition, dropped by journalist David Zweig, focuses on ‘how Twitter rigged the Covid debate‘ by taking direction from both the Trump and Biden administrations (while at the same time trying to censor the former president). What’s somewhat notable is how aggressive government (and ex-government) officials were in trying to stifle free speech, while Twitter’s non-government-linked employees would often push back (and then totally fold) – a theme we’ve observed in previous drops. In one such instance, former head of Twitter’s Trust & Safety team Yoel Roth tells former FBI lawyer and then-Twitter Deputy General Counsel Jim Baker to calm his tits over a Trump tweet.

Of course, in the end the government typically got its way, as you will read below.

– By censoring info that was true but inconvenient to U.S. govt. policy
– By discrediting doctors and other experts who disagreed
– By suppressing ordinary users, including some sharing the CDC’s *own data*

Zweig, who was granted access to internal files while on assignment for The Free Press, notes that “both the Trump and Biden administrations directly pressed Twitter executives to moderate the platform’s pandemic content according to their wishes.”

What’s more, the censorship effort extended to Google, Facebook, Microsoft and others.

7. It wasn’t just Twitter. The meetings with the Trump White House were also attended by Google, Facebook, Microsoft and others. pic.twitter.com/OgOrRxBBBW

Continued via The Free Press (emphasis ours),

In July 2021, then-U.S. Surgeon General Vivek Murthy released a 22-page advisory concerning what the World Health Organization referred to as an “infodemic,” and called on social media platforms to do more to shut down “misformation.”

“We are asking them to step up,” Murthy said. “We can’t wait longer for them to take aggressive action.”

That’s the message the White House had already taken directly to Twitter executives in private channels. One of the Biden administration’s first meeting requests was about Covid, with a focus on “anti-vaxxer accounts,” according to a meeting summary by Lauren Culbertson, Twitter’s Head of U.S. Public Policy.

They were especially concerned about Alex Berenson, a journalist skeptical of lockdowns and mRNA vaccines, who had hundreds of thousands of followers on the platform:

By the summer of 2021, the day after Murthy’s memo, Biden announced publicly that social media companies were “killing people” by allowing misinformation about vaccines. Just hours later, Twitter locked Berenson out of his account, and then permanently suspended him the next month. Berenson sued Twitter. He ultimately settled with the company, and is now back on the platform. As part of the lawsuit, Twitter was compelled to provide certain internal communications. They revealed that the White House had directly met with Twitter employees and pressured them to take action on Berenson.

The summary of meetings by Culbertson, emailed to colleagues in December 2022, adds new evidence of the White House’s pressure campaign, and illustrates how it tried to directly influence what content was allowed on Twitter.

Culbertson wrote that the Biden team was “very angry” that Twitter had not been more aggressive in deplatforming multiple accounts. They wanted Twitter to do more.

Twitter executives did not fully capitulate to the Biden team’s wishes. An extensive review of internal communications at the company revealed that employees often debated moderation cases in great detail, and with more care for free speech than was shown by the government.

But Twitter did suppress views—and not just those of journalists like Berenson. Many medical and public health professionals who expressed perspectives or even cited findings from accredited academic journals that conflicted with official positions were also targeted. As a result, legitimate findings and questions about our Covid policies and their consequences went missing.

There were three serious problems with Twitter’s process.

First: Much of the content moderation on Covid, to say nothing of other contentious subjects, was conducted by bots trained on machine learning and AI. I spent hours discussing the systems with an engineer and with an executive who had been at the company for more than a year before Musk’s takeover. They explained the process in basic terms: Initially, the bots were fed information to train them on what to look for—but their searches would become more refined over time both as they scanned the platform and as they were manually updated with additional chosen inputs. At least that was the premise. Though impressive in their engineering, the bots would prove too crude for such nuanced work. When you drag a digital trawler across a social media platform, you’re not just catching cheap fish, you’re going to snag dolphins along the way.

Second: Contractors operating in places like the Philippines were also moderating content. They were given decision trees to aid in their process, but tasking non-experts to adjudicate tweets on complex topics like myocarditis and mask efficacy data was destined for a significant error rate. The notion that remote workers, sitting in distant cube farms, were going to police medical information to this granular degree is absurd on its face.

Embedded below is an example template—deactivated after Musk’s arrival—of the decision tree tool that contractors used. The contractor would run through a series of questions, each with a drop down menu, ultimately guiding them to a predetermined conclusion.

Third: Most importantly, the buck stopped with higher level employees at Twitter. They chose the inputs for the bots and decision trees. They determined suspensions. And as is the case with all people and institutions, there was both individual and collective bias.

At Twitter, Covid-related bias bent heavily toward establishment dogmas. Inevitably, dissident yet legitimate content was labeled as misinformation, and the accounts of doctors and others were suspended both for tweeting opinions and demonstrably true information.

Here is one such tweet, from March 15, 2021, regarding vaccination. 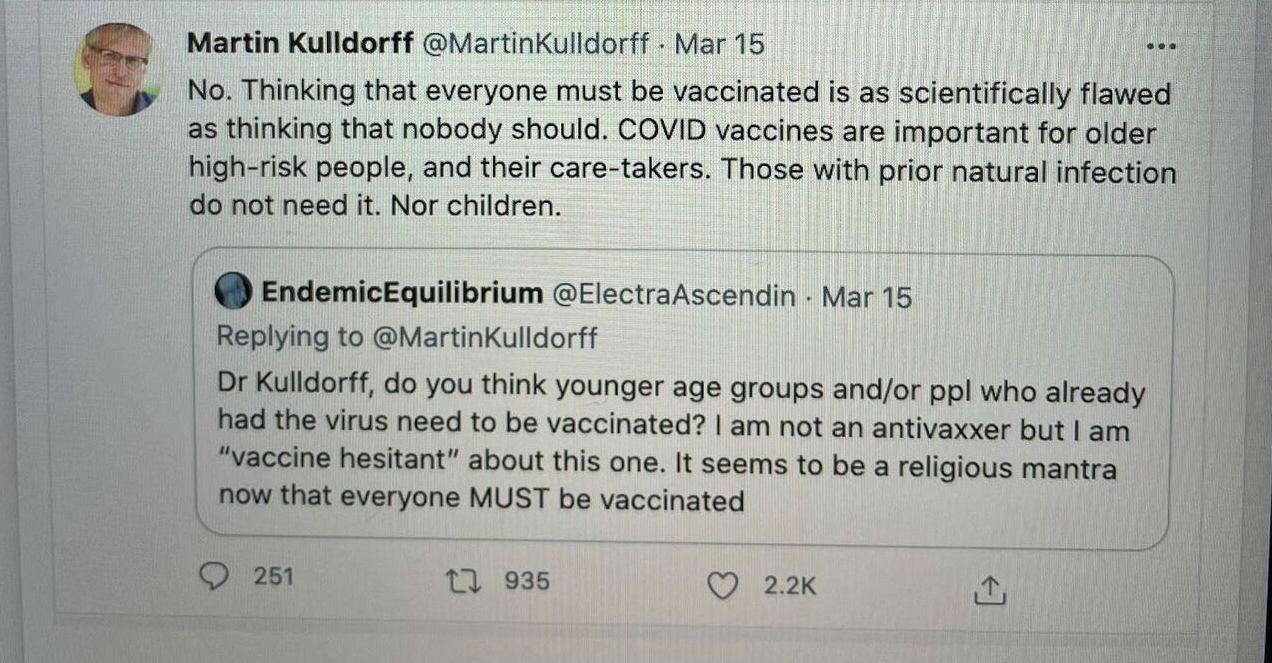 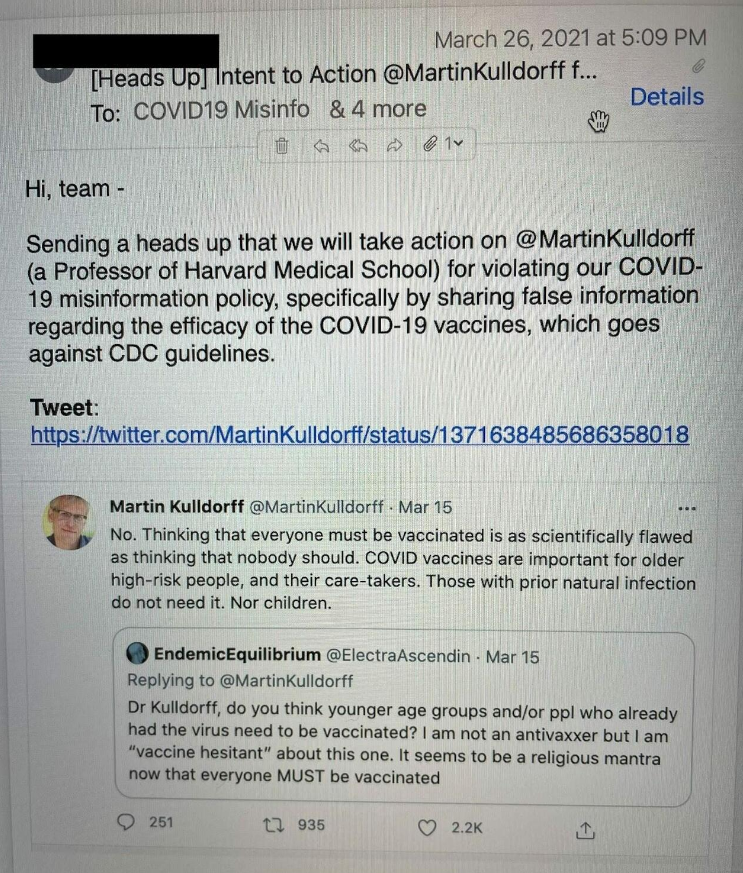 But Kulldorff’s statement was an expert’s opinion—one that happened to be in line with vaccine policies in numerous other countries.

Yet it was deemed “false information” by Twitter moderators merely because it differed from CDC guidelines. After Twitter took action, Kulldorff’s tweet was slapped with a “misleading” label and all replies and likes were shut off, throttling the tweet’s ability to be seen and shared by others, a core function of the platform. 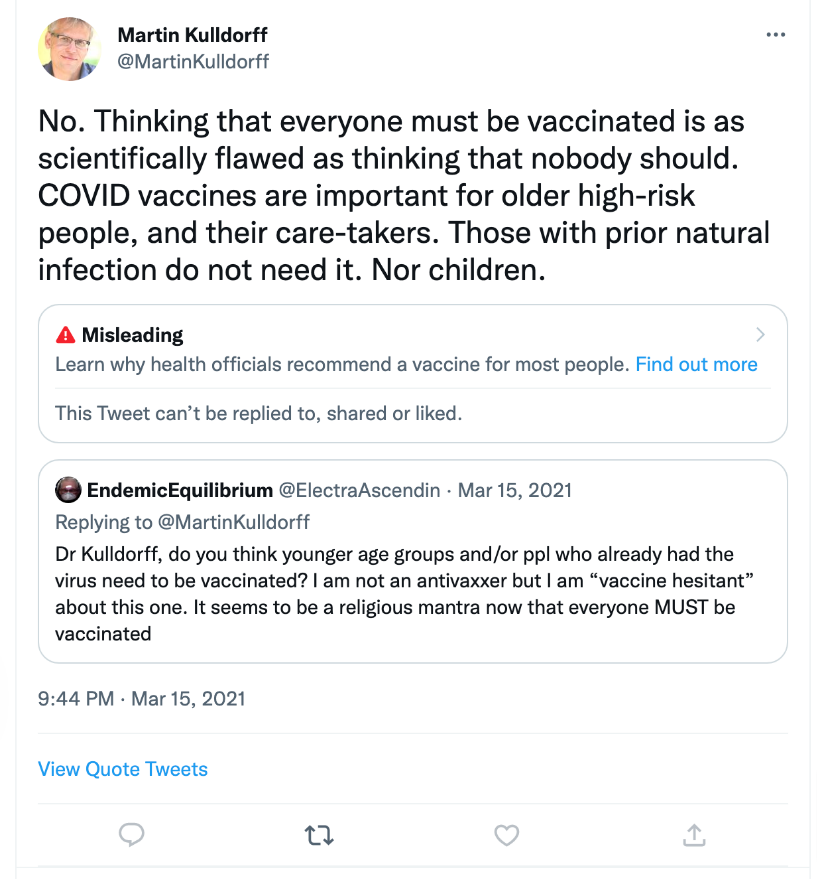 In my review of internal files, I found numerous instances of tweets about vaccines and pandemic policies labeled as “misleading” or taken down entirely, sometimes triggering account suspensions, simply because they veered from CDC guidance or differed from establishment views.

For example, a tweet by @KelleyKga, a self-proclaimed public health fact checker with more than 18,000 followers, was flagged as “misleading,” and replies and likes disabled, for showing that Covid was not the leading cause of death in children, even though it cited the CDC’s own data.