The Mobilization Begins - Scenes Around Russia: "What Are We Going For?" • JoshWho News

The Mobilization Begins – Scenes Around Russia: “What Are We Going For?” 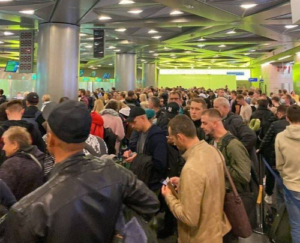 The day after President Putin’s partial mobilization order – wherein at least 300,000 Russian reservists have been called up – was met Thursday with some scenes of enthusiasm in Moscow, but also many instances of frustration and confusion in various parts of the country.

“Summons delivered to eligible men at midnight. Schoolteachers pressed into handing out draft notices. Men given an hour to pack their things and appear at draft centers,” The Guardian observed. “Women sobbing as they sent their husbands and sons off to fight in Russia’s war in Ukraine.”

First clips coming out of Russia this morning of draftees saying bye to their families. This from a small town in Yakutsk. Credits @taygainfo pic.twitter.com/tlaVRoDgLT

Putin’s speech had cited a “threat to the territorial integrity” of Russia, but in some places sparked immediate protest by local anti-war voices who complain that the country’s young men will be sent to front lines in Ukraine as “cannon fodder”.

This as Russian airports continue to be packed, and tickets abroad reportedly sold out for days or even weeks, as people with means exit the country on fears of being sent to fight… 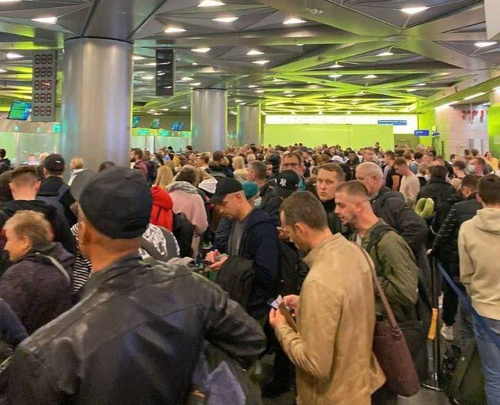 “Thousands of men across Russia were handed draft papers and NGOs helping conscripts were flooded with requests for help Thursday amid the military mobilization launched by President Vladimir Putin to provide extra manpower for the Ukraine war,” The Moscow Times reports Thursday.

“One Muscovite who was detained with her husband at an anti-mobilization demonstration told The Moscow Times that male protesters were given draft papers at the police station.”

Footage of men lined up on the tarmac of a military airbase, wearing civilian clothes while toting military gear bags, has emerged and was circulated on social media after being published by regional outlet Mash.

According to a further description of another scene wherein a Moscow woman watched her husband leave for war:

“There was a military recruiting officer who gave the detained men draft notifications,” she told The Moscow Times.

“When the first person was asked to go to a separate room, we did not understand what was going on — but when he returned with a draft slip, we just started crying.”

Meanwhile, it only took a few hours for another group of mobilised Russians to get dead drunk. “What are we going for? Where are going? F*ck knows!”, one concludes. pic.twitter.com/8XUP4UNbFP

Recruitment and mobilization has reportedly been met with some pushback and controversy particularly in outlying ethnic minority regions of the Russian Federation.

Pretty powerful video. In Dagestan locals clearly don’t want to go to war with Ukraine. The recruiting officer argues they have to fight for the future. – We don’t even have a present, what future are you talking about,” replies a Dagestani man. pic.twitter.com/1O4ob2GhSN

Another regional report described of some clips being widely shared:

One video, reportedly taken in Yakutia, shows the management of local companies summoning their workers and loading them onto buses heading to recruitment offices.

Tickets for travel abroad have skyrocketed in price, with most being for one-way flights out of the country.

Flights departing Moscow and St. Petersburg today. The @AP is reporting international flights departing Russia have either sold out or skyrocketed in price after Putin announced a mobilization of reservists.

The Associated Press has meanwhile reported of ongoing anti-war protests popping up in various locales across the country, particularly in large cities:

As protest calls circulated online, the Moscow prosecutor’s office warned that organizing or participating in such actions could lead to up to 15 years in prison. Authorities issued similar warnings ahead of other protests recently. Wednesday’s were the first nationwide anti-war protests since the fighting began in late February.

The state communication watchdog Roskomnadzor also warned media that access to their websites would be blocked for transmitting “false information” about the mobilization. It was unclear exactly what that meant.

Protests have been filmed in and around Moscow and St. Petersburg Wednesday night into Thursday, with hundreds of arrests reported…

In #Moscow, #Russia, the police are detaining protesters against the mobilisation at an unauthorised #protest rally taking place tonight. The protester who is being detained is chanting “No to War!”.

One activist group was cited in The Guardian as saying of Putin’s Wednesday speech and military order related to Ukraine mobilization, “It’s not a partial mobilization, it’s a 100% mobilization.”

Writes The Guardian: “During a televised interview on Wednesday, Shoigu said Russia would be targeting 300,000 draftees, mainly those with recent military experience. But the actual number in an order signed by Putin is secret.”