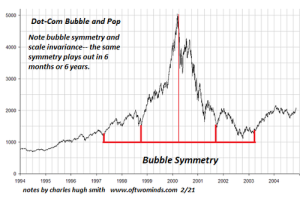 Who believed that central banks’ financial perpetual motion machine was anything more than trickery designed to generate phantom wealth?

Central banks seem to have perfected the ideal financial perpetual motion machine: as credit expands, money pours into risk assets, which shoot higher under the pressure of expanding demand for assets that yield either hefty returns (junk bonds) or hefty capital gains as the soaring assets suck in more capital chasing returns.

For those priced out of traditional assets, there’s NFTs, meme stocks and short-duration options. The credit-asset bubble-economy casino has a gaming table for everyone’s budget and desire to “make it big” via speculation, since the traditional ladders to middle-class security have all been splintered.

Count the lighted windows at night in all those new condo high-rises. Are even 20% occupied? Probably not.

This is how you get a “housing shortage”: investors would rather keep units clean and off the market rather than risk renting units. When credit and asset valuations are both feeding an infinite expansion, all that matters is leveraging capital to acquire as many assets as possible to maximize the gains from this self-reinforcing wealth-creation machine.

This machine also incentivizes fraud. To really maximize gains, why not borrow clients’ capital? Indeed, why not?

But unbeknownst to the central bank sorcerers and the greed-crazed participants, all systems have limits and all consequences have their own consequences, i.e. second-order effects. There are many such dynamics which are eroding the apparently unbreakable financial perpetual motion machine.

One is debt saturation. Even low rates of interest eventually pile up consequential debt-service obligations, and any weakening in revenues, cash flow or income exposes the borrower to a cash crunch which can only be resolved by selling assets.

Another is the widening disconnect between financially sound valuations and “market” valuations set by rapidly expanding credit and collateral. Based on rental income or cash flow, Asset B is worth $200,000, but it’s currently valued at $1 million, and still rising. Obviously, traditional methods of valuation no longer apply.

But weirdly enough, they do. Debt service doesn’t matter when your collateral is expanding so fast you can borrow mountains of capital at “low, low prices” and not even consider debt service. But once collateral stops rising and interest rates start rising, suddenly all those absurd obsessions with cash flow start making sense.

But too late, too late: bubbles, regardless of how rock-solid the sorcery, tend to manifest symmetry: they fall at roughly the same rate and magnitude as they rose. As collateral declines, loans slide underwater as the asset is not longer worth more than the outstanding loan. Credit dries up and so does buying as greed-crazed buyers start worrying that perhaps the asset they’re about to buy might actually be worth less next month (gasp).

Liquidity and the credit impulse aren’t sorcery, they’re herd behaviors. When the madness of the herd switches from greed to panic, buyers disappear and thus so does liquidity–the ability of sellers to find a Greater Fool to buy the depreciating asset.

Greater Fools are soon wiped out and then there’s nobody left who’s dumb enough to buy assets that are in freefall and still far above any financially prudent valuation. The magic circle reverses, and as valuations fall, collateral shrinks and credit collapses. Lenders who greedily reckoned valuations and thus collateral would rise forever are stuck with life-changing losses–along with all the punters who built shanties of credit and leverage they mistakenly viewed as permanent palaces. 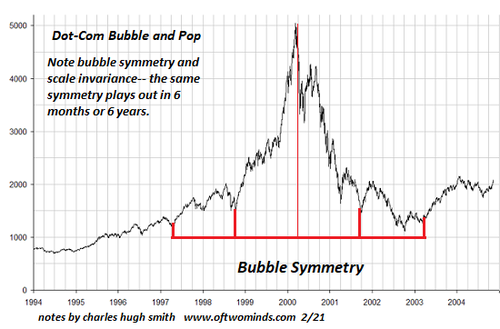 Who believed that central banks’ financial perpetual motion machine was anything more than trickery designed to generate phantom wealth? Once the death spiral reaches its devastating end-game, the true believers will have fallen silent.

Become a $1/month patron of my work via patreon.com.