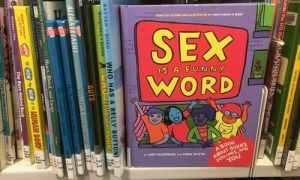 Authored by Darlene McCormick Sanchez via The Epoch Times (emphasis ours),

A Texas mother, frustrated by her school board’s reluctance to remove books with graphic sexual content from school libraries, found an embarrassing technique for getting board members and the public to pay attention.

Her unusual method may have hastened the removal of one objectionable book from shelves and brought the issue of sexual content in school libraries to the attention of social media viewers worldwide.

At last count, the number of views of her most-recent appearance at a school board meeting had reached nearly 372,000 on Twitter after being shared by Libs of TikTok.

UNREAL. Parent in @friscoisd reads from a pornographic book available to kids. A board member stops her and says “there’s a child in our board room.”

They acknowledge it’s inappropriate to read in front of children but these books can be in the school library. Make it make sense pic.twitter.com/VwpUBWOYnb

The video shows Shannon Ayres reading from the book, “The Perks of Being a Wallflower,” at a board meeting of the Frisco Independent School District on Nov. 16.

Ayres, the mother of grown children who attended school in the district, now serves on the board of the local chapter of the watchdog group County Citizens Defending Freedom.

In the clip, Ayres takes her spot at the podium during public comment and begins reading a passage from the book found in the library of at least one district high school. The excerpt graphically describes a young girl protesting and crying as a boy forces her to perform oral sex.

“I ask you why this book has survived two attempts…” Ayres tries to ask board members.

Off-camera, a school board trustee can be heard talking over her as Ayres’ microphone is turned off at the end of her comment period.

“Thank you. Your time is up. Thank you so much. There’s a child in our boardroom, so I’d like for you to please stop reading that,” board president Rene Archambault interrupts, drawing loud complaints from the audience.

Ayres told The Epoch Times she decided to begin reading excerpts from books that remained in libraries after making it through at least one review process. Though distasteful, she felt reading passages would focus attention on the remaining books.

“Identical,” which has a scene where a father rapes his daughter, was already under a second review but removed within 48 hours after she read from it at a previous school board meeting.

So Ayres signed up to speak again during the meeting set aside for public comment. And that’s what drew her public scolding now circulating around the world.

“My heart was beating so hard I felt like they could see it beating through my shirt. It was scary. I had to say a little prayer to get the words out. It’s just vile,” she said.

The irony of Archambault’s comment seems to amaze viewers—that a school library book is too graphic to be presented in front of children.

“The hypocrisy was so blatant,” Ayres said.

Archambault’s comments later in the meeting indicated that the child in the audience was of elementary-school age. She said it was vastly different for a child to be “forced” to listen to the material read during a board meeting versus checking out a book from the library.

She apologized that the child’s mother had to cover her ears while the book passage was read and asked people to email concerns about books in the future so children wouldn’t be exposed to the content during board meetings.

At that point, trustee Marvin Lowe, one of two conservative board members, spoke up.

“I understand what you’re saying for a kid to hear what was in that book, but do we need to apologize to the community that those books are in our library, to begin with?” Lowe said, prompting applause from the audience.

Ayres said she did not realize a child was at the meeting.

“And I was upset when I realized afterward there was a child in the room because obviously that’s what I’m trying to avoid is children having to be exposed to that,” she said.

The frustrating part is that she said some objectionable books have been on shelves for a year after being challenged.

Besides the “Wallflower” book, six other titles remain on the shelves: “Check, Please! Book 1:#1 Hockey,” “Chicken Girl,” “Glass,” “Glass Castle,” “The Perks of Being a Wildflower,” “The Absolutely True Diary of a Part-Time Indian,” and “The Exact Opposite of Okay.”

Frisco ISD’s website says parents and community members may object to titles that don’t follow district policy. But it also noted that the district must protect students’ First Amendment rights.

Ayres said minors aren’t allowed to carry guns, which isn’t an infringement on their Second Amendment rights. Likewise, she added, taking books with sexual content out of libraries doesn’t infringe upon their First Amendment rights.

Even with the intervention of state Rep. Jared Patterson, a Frisco Republican, the seven books remain on school library shelves after two appeals.

Patterson told The Epoch Times he was sorry the child in the audience heard the book’s content.

“I’m sorry that any child has to see that in their school,” he said.

Patterson started objecting to books last November, he said. But when school started in August 2022, there were still 28 books with sexual or inappropriate content in Frisco ISD libraries.