Steve Bannon On 'My Son Hunter': 'This Film Is Only Gonna Get Bigger As We Get Closer To The Hearings That Are Gonna Take Place' • JoshWho News

Steve Bannon on ‘My Son Hunter’: ‘This Film Is Only Gonna Get Bigger as We Get Closer to the Hearings that Are Gonna Take Place’ 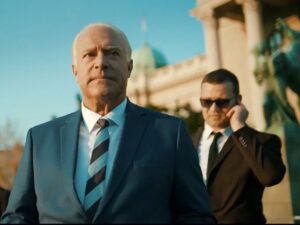 Steve Bannon, the former Trump White House chief strategist and host of the popular “War Room” podcast, is predicting the new movie My Son Hunter will only grow in importance and stature when Congress holds hearings into the corruption surrounding Hunter Biden and his numerous overseas business deals.

On Wednesday’s episode of “War Room,” Steve Bannon, who was also Breitbart News’ executive chairman, spoke about the role that My Son Hunter will play if, as widely expected, Republicans regain control of the House in November. He also praised director Robert Davi’s work on the movie, calling Davi a “huge” talent for the MAGA movement.

“This film is only gonna get bigger as we get closer to the hearings that are gonna take place,” Bannon said. “And now everybody behind the scenes knows they’re gonna take place.” He added that “people need to see [the movie] to prep themselves for what will lead to the impeachment of Joe Biden.”

Bannon’s comments come just a few days after Tony Bobulinksi, Hunter Biden’s former business associate, revealed in a new interview with Fox News’ Tucker Carlson that no one from Facebook or Twitter asked him to verify the authenticity of the laptop from hell, even though he would have produced the corroborating email, with the metadata, within minutes.

Both Facebook and Twitter suppressed the New York Post‘s original laptop reporting in the months leading up to the 2020 presidential election.

Bobulinski also stated that he had a “five-plus hour interview” with the FBI on October 23, 2020, after which his lawyers were told that there would be a follow-up interview. Yet, despite this, he and his lawyers haven’t heard from the FBI since before the 2020 election.

During the “War Room” episode, Bannon spoke with My Son Hunter producer Phelim McAleer, who said the movie dramatizes much of Hunter Biden’s shady business dealings.

“It’s all there,” McAleer said, including the millions Hunter got in deals in China and Ukraine. “Real world events just keep proving that the movie was correct all along,” he added. “The left have slammed this film and the message that is going out is ‘don’t watch this movie.’”

Indeed, there’s a bevy of Hunter Biden’s actual foreign business deals My Son Hunter dramatizes that lawmakers could probe. For example, a $5 million agreement with his Chinese business associate Patrick Ho, whom he referred to as “the fucking spy chief of China” in a recording on his laptop.

Hunter also struck a $1.5 billion deal with a subsidiary of the Bank of China, a mere 12 days after he visited China with his father, who was vice president at the time. He also formed a partnership with a Chinese military-linked company.

McAleer said “people should watch the movie and then go on Google and find out what the proof is.”

Bannon asked McAleer about holding screenings of My Son Hunter around the time of the investigation.

“That is our plan,” McAleer said. “I think we need to have screenings after screenings. It needs to be on a loop, 24 hours, in Congress, so that everyday when they come into work, they see the Hunter Biden story.”

“The reason we’re investigating Hunter Biden is because we believe he’s compromised Joe Biden,” Comer, who will likely be the next House Oversight Committee chairman, told reporters. 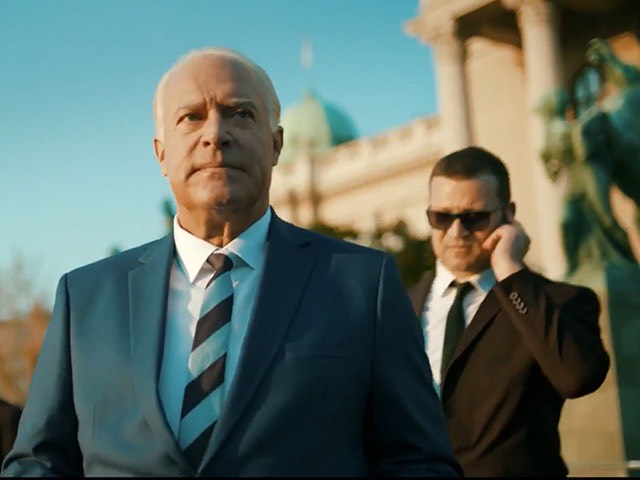 John James as Joe Biden in My Son Hunter. (mysonhunter.com)

As Breitbart News reported, House Oversight Committee Ranking Member James Comer (R-KY) recently said that an investigation into Hunter Biden will commence once Republicans take back control of the House.  “The reason we’re investigating Hunter Biden is because we believe he’s compromised Joe Biden,” he said in September.

House Oversight Committee Ranking Member James Comer (R-KY) said that an investigation into Hunter Biden will commence once Republicans take back control of the House. https://t.co/M6pOkiImgO

The film was directed by Robert Davi (Goonies, License to Kill, Die Hard) and stars Laurence Fox (Victoria, Inspector Lewis, The Professor and the Madman) as Hunter Biden; Gina Carano (The Mandalorian, Deadpool, Heist) as a Secret Service agent; and John James (Dynasty) as Joe Biden.

My Son Hunter is available RIGHT NOW for Streaming and Downloading at MySonHunter.com.

The trailer below has been viewed almost 5 million times across social media.