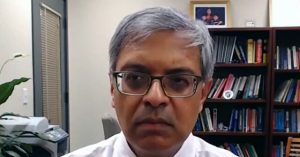 On Thursday’s broadcast of the Fox News Channel’s “Ingraham Angle,” Stanford University Professor of Medicine Dr. Jay Bhattacharya reacted to revelations that his Twitter account was put on a “trends blacklist” by stating that Twitter blocked “scientific discussion” and this “harmed science, harmed children, and harmed the American public.”

Bhattacharya stated, “It feels like some novel from the 1950s, where the House Un-American [Activities] Committee is meeting to decide who to suppress and I’m some sort of movie star from — in Hollywood that they’re blacklisting because I’m a Communist or something. It’s ridiculous, and it really hurt public health. If we had had an open discussion, Laura, the schools would not have closed in the fall of 2020. If we’d had an open discussion, the lockdowns would have been lifted much earlier because the data and evidence behind them was so bad. Twitter, by suppressing scientific discussion harmed science, harmed children, and harmed the American public.”