Something Snaps In The US Labor Market: Full, Part-Time Workers Plunge As Multiple Jobholders Soar 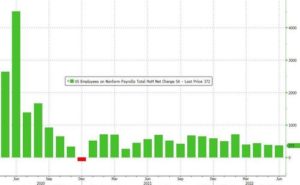 Something odd emerges when looking at the June payrolls report. 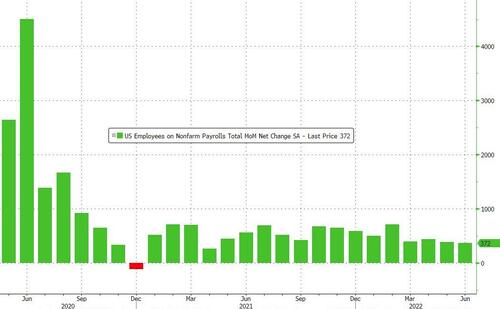 … and with wages in line with expectations, rising 0.3% M/M or 5.1% Y/Y, it was enough for many to conclude that calls of a recession are premature because, after all, you can’t enter a recession when jobs are rising by almost 400K.

True… but a problem emerges when looking at the more detailed, if less closely watched, Household survey. Here, unlike the Establishment Survey, the June jobs change was actually a striking 315K drop, and after the April plunge of 353K, the June drop was actually the biggest going back to the March 2020 crash. 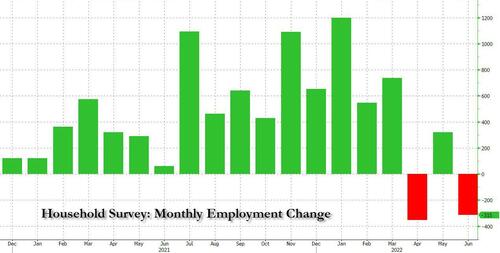 And since the Household survey also feeds other closely watched ratios, such as the labor force participation rate, it explains why despite the apparent “surge” in June jobs, the LFP declined and is now unchanged since January. 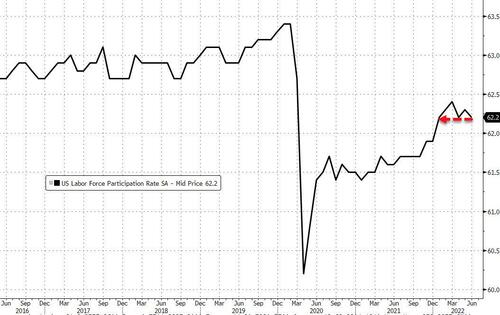 So what’s going on here? Well, starting at the top, we find the following discrepancy:

But things only get worse after that, because if one goes back a little more, one finds that something appears to have broken a few months ago, around March, when the Establishment Survey kept on rising unperturbed, while the Household Survey hit some unexplained brick wall, and hasn’t moved at all. 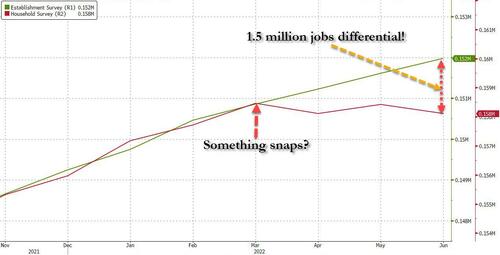 In fact, since March, the Establishment Survey shows a gain of 1.124 million jobs while the Household Survey shows an employment loss of 347K! 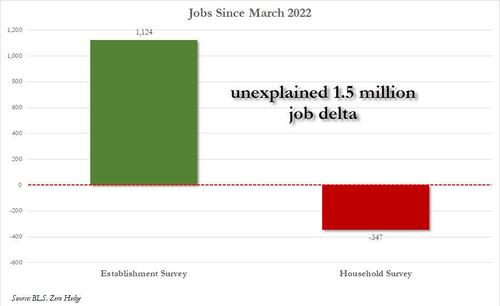 But wait, there’s more, because digging in even deeper, we find that this drop in Household Survey employment is the result of both full-time and part-time jobs. In fact, as shown below, since March, the US has lost 70K full-time employees and 462K part-time employees. 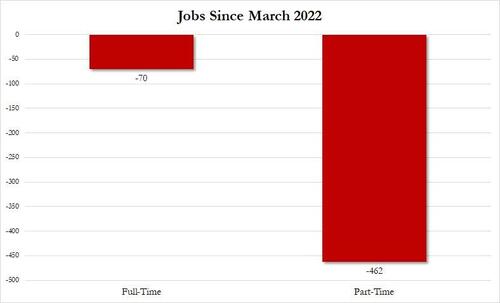 This trend has persisted into June, when according to the BLS, the US labor force saw a 152K drop in full-time workers and a 326K drop in part-timers (source). The offset? Multiple jobholders, or people who have more than one job.

As shown below, while  the number of total employees (per the Household Survey) has stagnated, the number of multiple jobholders has been growing steadily, hitting a new post-covid high in June of 7,541 million. 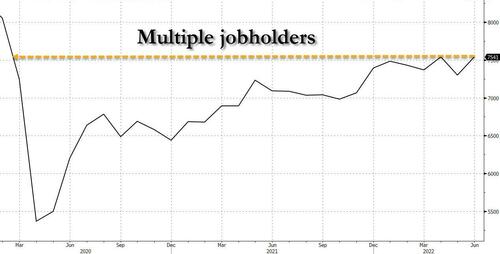 The increase for June? 239K, which stands in stark contrast to the decline in individual holders of single part-time and full-time jobs.

And even more remarkable: the number of multiple jobholders whose primary and secondary jobs are both full-time just hit a record high! Hardly the sign of a strong job market, one where people can afford to quit jobs at will. 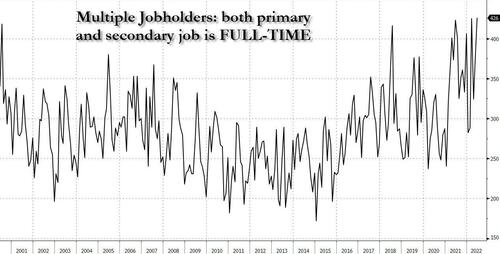 So what’s going on here? The simple answer: Fewer people working, but more people working more than one job, a rotation which picked up in earnest some time in March and which has only been captured by the Household survey.

And since the Establishment survey is far slower to pick up on the nuances in employment composition, while the Household Survey has gone nowhere since March, the BLS data engineers have been busy goalseeking the Establishment Survey (perhaps with the occasional nudge from the White House) to make it appear as if the economy is growing strongly, when in reality all they are doing is applying the same erroneous seasonal adjustment factor that gave such a wrong perspective of the labor market in the aftermath of the covid pandemic (until it was all adjusted away a year ago). In other words, while the labor market is already cracking, it will take the BLS several months of veering away from reality before the government bureaucrats accept and admit what is truly taking place.

We expect that “realization” to take place just after the midterms, because the last thing the Biden administration can afford is admit the labor market is crashing in addition to the continued surge in inflation.