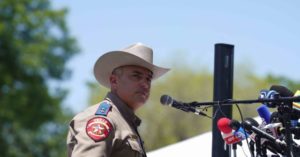 The Texas Department of Public Safety (DPS) revealed Thursday that the gunman who murdered 19 children and two teachers in Uvalde on Tuesday walked into the school through an unlocked door, and did not encounter any school police.

Previously, the media had been informed that the 18-year-old who carried out a mass shooting at the Robb Elementary School had been confronted by an armed school resource officer outside school, and had exchanged gunfire with him.

On Thursday, DPS Regional Director Victor Escalon told reporters that at 11:28 a.m. on Tuesday, after the gunman crashed a pickup truck near the school, he began his attack. The gunman climbed a four-foot-high chain link fence around the school, and fired at the school as he approached. He also fired at two eyewitnesses at a funeral home nearby. By 11:40 a.m., he had approached the west side of the school. He “was not confronted by anybody” outside the school, armed or otherwise.

Escalon added that there was no school resource officer on campus, and that the first report came to police at 11:30 a.m.

Though said it was still uncertain, it appeared that the shooter had entered the building through an unlocked door. He said that further investigation could reveal that the door was unlocked, but that at the moment it appeared to have been unlocked.

Escalon added that local police responded sixteen minutes after the crash, at 11:44 a.m., and entered the building, but retreated after an exchange of gunfire in which some officers were apparently wounded. Law enforcement then waited outside the building for an hour.

There were apparently some negotiations with the gunman, who had barricaded himself inside a fourth-grade classroom. There were few gunshots during that hour; Fox News reported that most of the killing happened early, though it was not apparent whether some of the victims who were wounded in the first minutes of the rampage could still have been saved.

The shooter was killed in an exchange of gunfire with a Border Patrol tactical officer who later rushed into the building.