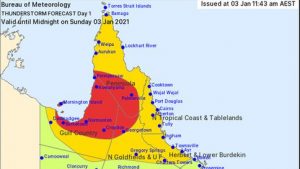 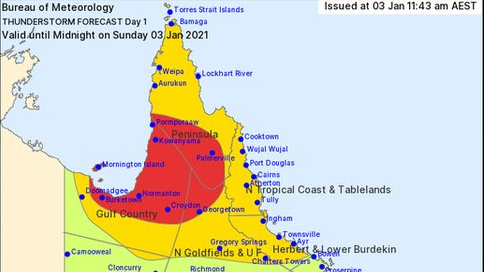 A severe weather warning has been issued for far north Queensland as a tropical cyclone is expected to develop in the Gulf of Carpentaria.

A tropical low is expected to intensify becoming a tropical cyclone on Sunday, according to a warning issued by the Bureau of Meteorology.

Severe thunderstorms with heavy rainfall and damaging winds are likely about areas of Northern Qld today due to a tropical low which is expected to reach category 1 cyclone intensity later today. Sev TS also possible throughout southern interior. pic.twitter.com/ZVPYIiYYW2

The system is forecast to move towards the east-southeast, stalling over the Cape York Peninsula before moving towards the north tropical coast.

“The system’s going to move over to land and it’s going to weaken as it does so, but it’s going to hang around and bring some significantly heavy rainfall to the north tropical coast,” Marshall added.

A severe weather warning has been also issued for heavy rainfall leading to flash flooding over the next few days from Cooktown to Ingham as well as inland parts of the Cape York Peninsula.

The heavy rain is expected to continue on Monday and into Tuesday.

“Isolated falls of a few hundred millimetres are possible on each day in coastal areas,” Marshall said.

Severe thunderstorms are also expected across northern Queensland and the south-eastern interior on Sunday.