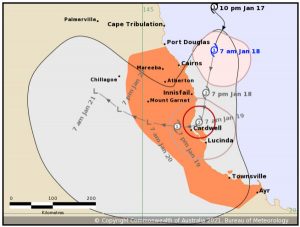 Far North Queensland residents are battening down the hatches as Tropical Cyclone (TC) Kimi is expected to strengthen off the east coast and make landfall somewhere between Innisfail and Lucinda on Monday evening Tuesday.

The Bureau of Meteorology said that as of 7 a.m. on Monday the weather system was 85 kilometres east-northeast of Cairns and 295 kilometres north of Townsville.

TC Kimi is expected to develop damaging and destructive winds sometime on Monday or Tuesday with gusts forecast to reach 120 km/ph.

The cyclone slowly crept south throughout Sunday and is expected to shift course on Monday in a south-southwest direction, moving at 9 km/ph.

However, authorities have warned that the cyclone may shift direction once again.

“The system is most likely to approach, and may cross, the coast late today or early Tuesday between about Innisfail and Lucinda, however, there remains considerable uncertainty with the crossing time and location,” the Bureau Of Meteorolgy warned. “The system may intensify further during today and is likely to be at least at least a category two system as it approaches the coast.”

“Cyclones are a little bit unpredictable, and they will move … during the course of today,” she said.

The Queensland Disaster Management Committee will meet on Monday at 3.30 p.m. with the ministers and mayors of the affected regions.

“I know that people in the north are very well prepared when it comes to cyclones. They know how to deal with these, they do listen to what authorities are saying, and they are very, very well prepared,” Palaszczuk said.

The Police Deputy Commissioner Steve Gollschewski warned residents that the cyclone had shifted directions multiple times already and urged them to monitor updates throughout the day.

The system will bring heavy rainfall, and flash flooding will be a risk along the tropical east coast for the next few days with a flood watch in place between Cape Flattery and Ingham.

“People between Port Douglas and Ayr and inland to Mareeba and Atherton should immediately commence or continue preparations, especially securing boats and property,” the BOM said in an update issued online.

Recent rain has saturated the soil, creating the conditions for flash flooding.

“I know we’re Queenslanders, I know we go through cyclones every single year, but please do not be complacent,” Police Minister Mark Ryan said.

“So if you’re in those areas you need to prepare … if it’s flooded forget it, have a plan about where you’ll be travelling, bear in mind where those river catchments are, be aware that during this event you could have flash flooding,” he said.

The cyclone had been set to cross the coast between Cooktown and Innisfail, but it’s now expected to make landfall further south between Innisfail and Lucinda.