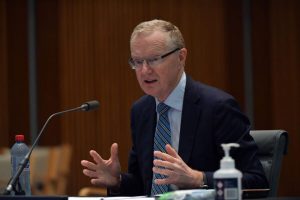 The Reserve Bank of Australia (RBA) has said it would continue to “carefully” monitor trends in housing borrowing after announcing it will hold the cash rate at the current record low 0.1 percent.

However, despite the housing market experiencing the fastest price growth in 32 years, Lowe reiterated that the bank would not raise interest rates until sustainable inflation reached 2 to 3 percent.

“Housing markets have strengthened further, with prices rising in most markets,” Lowe said. “Housing credit growth to owner-occupiers has picked up, with strong demand from first-home buyers.”

“Given the environment of rising housing prices and low interest rates, the Bank will be monitoring trends in housing borrowing carefully, and it is important that lending standards are maintained.”

Commonwealth Bank’s Head of Australian Economics Gareth Aird told The Australian that he believes the use of the word “carefully” likely pointed to an acknowledgement that the level of market growth surpassed their expectations.

The RBA and industry regulator, the Australian Prudential Regulation Authority (APRA), have both repeatedly stressed that they do not target housing prices.

APRA chairman Wayne Byres has said their responsibility was not to controlling house prices but to monitor and prevent a deterioration in lending standards.

“Household debt levels are undeniably high… Serviceability of that debt is also being supported by historically low-interest rates,” Bryes said in a speech. “However, at an aggregate level, [current] lending statistics do not show major signs of a return to higher risk lending.”

Many economists do not believe current conditions will prompt the central bank or other authority to step in and intervene.

Aird said credit growth and overall lending standards at his bank were still sound, so the introduction of macroprudential regulation this year was looking to be unlikely.

“People are willing to pay a lot more for a home because interest rates have gone down to their lowest level ever—not a reason of itself for either the RBA or APRA to step in to cool the market,” he said.

“We expect the RBA will continue to remain relaxed about the housing boom for the moment,” Bloxham told The Australian Financial Review. “A key lesson from the housing market correction of 2018 was that housing prices need to be rising to get enough momentum in consumer spending too, in turn, support a lift in inflation.”

“In short, the RBA needs housing prices to rise in order to achieve its inflation mandate.”

However, there are concerns that the unrestricted rise of housing prices will lock first-home buyers out of the housing market, but some experts say first-home buyers will be most affected if regulation, in the form of lending restrictions, get imposed.

“It’s fair to say that first-home buyers typically are disproportionately affected by macroprudential rules because they tend to have smaller deposits and take out larger loans relative to their income,” Brendan Coates, director of Grattan Institute, told Domain.

“These tools are not costless. That’s why APRA is reluctant to use them unless they are worried about financial stability,” he said.

While the cost of borrowing is at record lows, it is gradually being offset by the rapidly rising house prices. First-home buyers are turning their eyes to more affordable houses in outer suburbs and regions.

“The best intervention in the housing market is government efforts to rapidly expand the supply of housing, particularly regional housing,” Hogan said.