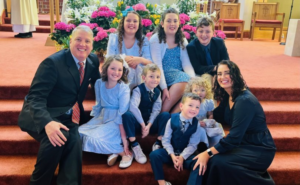 The FBI subjected a Catholic pro-life activist’s children to a fully-armored SWAT raid this week under the order of the DOJ.

Mark Houck, the founder and president of The King’s Men – a group that helps men overcome pornography addiction – was arrested at his rural Pennsylvania home on Friday for allegedly violating the Freedom of Access to Clinic Entrances (FACE) Act during his regular sidewalk counseling outside of an abortion clinic in 2021. Speaking with LifeSiteNews, Houck’s wife, Ryan-Marie, said that around 25 to 30 fully-armored FBI agents stormed their property early Friday morning, aiming their rifles as the children screamed in horror.

“They started pounding on the door and yelling for us to open it,” Ryan-Marie said of the raid. 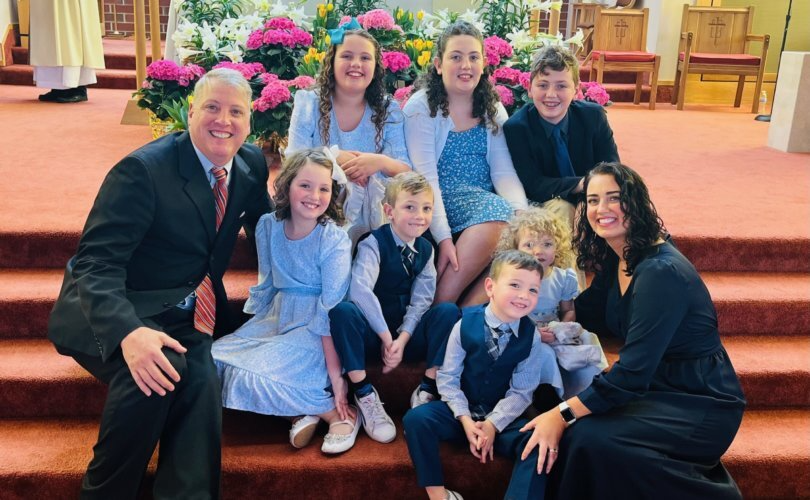 Prior to opening the door, Mark allegedly tried to reason with the agents to calm them down for the sake of his children. “Please, I’m going to open the door, but, please, my children are in the home. I have seven babies in the house,” Houck allegedly told the agents.

The FBI agents allegedly “just kept pounding and screaming,” according to Ryan-Marie.

“They had big, huge rifles pointed at Mark and pointed at me and kind of pointed throughout the house,” Ryan-Marie said of the moment that her husband opened the door for the agents.

“Our staircase is open, so [the kids] were all at the top of the stairs which faces the front door, and I was on the stairs as well, coming down,” she said.  “The kids were all just screaming. It was all just very scary and traumatic.”

Ryan-Marie then demanded that the agents present an arrest warrant before taking her husband, but they allegedly said that they would “take him whether they had a warrant or not.”

“You can’t just come to a person’s house and kidnap them at gunpoint,” she allegedly protested.

The agents agreed and went to retrieve the warrant. When Mark asked that she grab his rosary and sweatshirt, the agents had already loaded him into the vehicle upon her return. She told LifeSiteNews:

After they had taken Mark, and the kids were all screaming that he was their best friend, the [FBI agents on her porch] kind of softened a bit. I think they realized what was happening. Or maybe they actually looked at the warrant. They looked pretty ashamed at what had just happened.

Ryan-Marie said her children were “really sad and stressed” as a result of the raid and that she has already “reached out to some psychiatrists or psychologists to try and help us through this.”

“I don’t really know what’s going to come of it when you see guns pointed at your dad and your mom in your house when you first wake up in the morning,” she told the outlet.

According to Ryan-Marie, the charges were from an incident in which he shoved a pro-abortion activist who had been harassing his 12-year-old son in front of an abortion clinic during one of his sidewalk counseling sessions. The charges were reportedly “thrown out of the District Court in Philadelphia” earlier this year only to later be picked up by Merrick Garland’s Department of Justice. Per LifeSiteNews:

On several occasions when Mark went to sidewalk counsel last year, he took his eldest son, who was only 12 at the time, she explained. For “weeks and weeks,” a “pro-abortion protester” would speak to the boy saying “crude … inappropriate and disgusting things,” such as “you’re dad’s a fag,” and other statements that were too vulgar for her to convey.

Repeatedly, Mark would tell this pro-abortion man that he did not have permission to speak to his son and please refrain from doing so. And “he kept doing it and kind of came into [the son’s] personal space” obscenely ridiculing his father. At this point, “Mark shoved him away from his child, and the guy fell back.”

“He didn’t have any injuries or anything, but he tried to sue Mark,” and the case was thrown out of court in the early summer.

Local reports conveyed a different story, charging that Houck shoved the man, a 72-year-old, on two occasions, the second of which required “medical attention.” WHTM reported:

The report did not mention Ryan-Marie’s claim that the case had been thrown out of District Court prior to the Department of Justice picking up the charges.

The FACE Act makes it a federal crime to intimidate, injure, or interfere with anyone attempting to provide abortion access. U.S. Attorney Jacqueline C. Romero said:

Assault is always a serious offense, and under the FACE Act, if the victim is targeted because of their association with a reproductive healthcare clinic, it is a federal crime. Our Office and the Department of Justice are committed to prosecuting crimes which threaten the safety and rights of all individuals.

“Put simply, violence is never the answer,” said Jacqueline Maguire, Special Agent in Charge of the FBI’s Philadelphia Division. “Violating the FACE Act by committing a physical assault is a serious crime for which the FBI will work to hold offenders accountable.”