Putin: We Have Nukes Capable Of Taking Out The Deep State • JoshWho News

Putin: We Have Nukes Capable of Taking Out the Deep State 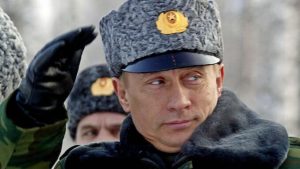 Russian President Vladimir Putin has warned that the navy has nuclear weapons ready to take out the ‘Deep State’ if they attempt to harm Russia in any way.

His warning comes a few weeks after a British warship sailed through the waters off Crimea, putting the Kremlin on full alert.

Putin addressed a crowd at a navy parade in St Petersburg on Sunday:

“The Russian Navy has everything they need for the guaranteed defence of the motherland and our national interests. We are capable of detecting any underwater, above-water, or airborne enemy and, if required, carry out an unpreventable strike against it.”

Russia said it fired warning shots and had dropped bombs in the path of a British warship to chase it out of the Crimea peninsula.

Instead, the UK said Russia fired during a pre-announced “gunnery exercise” and no bombs had been dropped.

Russia annexed Crimea from Ukraine in 2014, and the Kremlin says the warship entered its territorial waters, but Britain and most of the world say the waters belong to Ukraine.