Putin Says He’s Open To More Prisoner Swaps With US 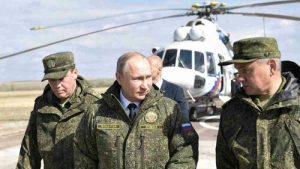 Russian President Vladimir Putin has signaled that more prisoner swaps with Washington might be on the horizon, at a moment the profiles of detained Americans Paul Whelan and Marc Fogel are rising in the wake of Brittney Griner’s Thursday release. There’s greater pressure on the Biden administration to obtain ex-Marine Whelan’s release especially.

Putin in Friday comments before the press said that “everything is possible” in terms of possible future prisoner exchanges. He recounted that “compromises have been found” that led to the Griner for Bout deal.

“We aren’t refusing to continue this work in the future,” Putin said. “We didn’t set the task to move from those talks to something else, but they do create a certain atmosphere.”

The Russian leader acknowledged that the success of the prisoner swap talks was due in part to not taking into consideration other issues, such as the ongoing Ukraine conflict.

The White House responded Friday to these remarks of Putin, with National Security Council coordinator for strategic communications John Kirby saying that indeed more prisoner swaps remain “possible” – stressing there are active channels of communication for this but that the US wants further “actions” and not just words out of Moscow.

Additionally, the US State Dept. said the following responding to Putin’s remarks about future prisoner swaps: “It’s not often we can say that we actually agree with something President Putin said, but today I can say that,” Net Price told CNN.

Meanwhile, Russian media continues to celebrate the swap as a huge victory in the Kremlin’s favor, as convicted arms trafficker Viktor Bout receives a hero’s welcome…