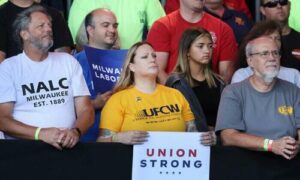 Authored by Kevin Stocklin via The Epoch Times (emphasis ours),

A recent report based on Bureau of Labor Statistics (BLS) data confirms what was anecdotally apparent: Jobs continue to flood out of pro-union states and into states with more free-market policies.

The National Labor Relations Act (NLRA), signed by President Franklin D. Roosevelt in 1935, forced employees who work for a unionized company to pay union dues as a condition of employment. However, the 1947 Taft-Hartley Act, which was first vetoed by President Harry S. Truman and then approved over his objections, allowed states to pass laws against forced union membership.

Currently, 28 states have RTW laws, and are reaping the benefits in terms of higher investment, employment, population growth, and state tax revenues.

“It’s not surprising to see the latest BLS numbers,” Lee Schalk, vice president of policy at the American Legislative Exchange Council (ALEC), told The Epoch Times. “It’s also consistent with the migration trends that we’ve tracked. This really came into focus during the pandemic as hundreds of thousands of people left non-right-to-work states like New York and California, and they flooded into right-to-work states like Florida, Texas, North Carolina, and a lot of southern states.”

The study by Nesbit and LaFaive found that 16 of the 28 RTW states have now fully recovered the jobs lost during the pandemic; some have even exceeded pre-pandemic levels of employment. Of the non-RTW states, only Colorado and Montana have recovered all the lost jobs.

To halt the decline of union jobs, House Democrats in March 2021 approved the Protecting the Right to Organize (PRO) Act, which would once again force union membership on all workers at unionized companies and nullify state RTW laws. The PRO Act “allows collective-bargaining agreements to require all employees represented by the bargaining unit to contribute fees to the labor organization for the cost of such representation, notwithstanding a state law to the contrary.”

Among other things, the measure also allows votes on unionization to be taken by having workers sign cards or petitions rather than by secret ballot. Opponents argue that this practice, called “card check organizing,” could leave workers open to intimidation by union organizers.

While praising the PRO Act, President Joe Biden stated that “nearly 60 million Americans would join a union if they get a chance, but too many employers and states prevent them from doing so through anti-union attacks. They know that without unions, they can run the table on workers—union and non-union alike.”

Biden has deemed himself “the most pro-union president in history.”

The legislation would be a lifeline for organized labor, whose membership has fallen steadily from 35 percent of America’s workforce in the 1950s to 10.5 percent today, with only 6.4 percent of private company workers choosing to be unionized (the remainder being government employees).

The PRO Act hasn’t been introduced in the Senate, and currently appears to have little support from Republicans. PRO Act supporters have disparaged RTW laws as “right to work for less,” arguing that workers are underpaid in RTW states compared to union states.

“RTW laws do not lead to lower average wages in either unionized or non-unionized industries,” according to a 2018 report by the consulting firm National Economic Research Associates (NERA). On the contrary, the report stated that personal incomes increased 10 percent more in RTW states from 2001 to 2016, rising by 39 percent, compared with 26 percent in non-RTW states.