Polish Pastor Who Kicked Coronavirus Police Out of Church Speaks Out 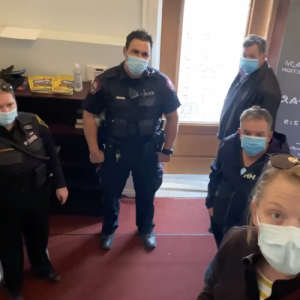 Pastor Artur Pawlowski, who went viral after kicking several officers out of his church, spoke to the Daily Caller about the months of harassment he says his church has experienced at the hands of police.

One Calgary police officer and officials from Alberta Health Services and City of Calgary Bylaw services interrupted a Passover service Saturday night at the Street Church in Alberta, Canada. They had entered the church building uninvited on its holiest, most anticipated day for parishioners, Pawlowski told the Caller.

Pawlowski claimed he had been harassed by authorities for 13 months. He has asked repeatedly that officials not enter the church building in their capacity as law enforcement, or harass and intimidate the parishioners.

“If they want to talk or inspect the building, they can call me and we can arrange that,” the pastor explained. But instead of meeting with him, he said, “they preferred a method of storming.”

Instead of arranging a meeting, Pawlowski said, “They just wanted to walk in in the middle of worship.” He was shocked to see the officials act as if the church was like “their own home.” (RELATED: Police Raid Home Of Woman Who Built COVID-19 Tracking Software For Government)

After telling the officials to leave, the pastor grabbed his phone and began recording the incident. The now-viral video shows him repeatedly yelling “out!” for several minutes until the officers finally walk away.

“I asked them to get out, and they would not move,” the pastor said. “So everything started to intensify. And I raised my voice, and I said it again and again and again, and they just didn’t want to go.”

“The organizer of the gathering was uncooperative with the health inspector, and repeatedly raised his voice asking all parties to leave the premises, which they did approximately one minute after entry and in a peaceful manner,” the Calgary Police said in a statement about the incident.

Pawlowski said he was “really shaken” because he was not expecting them to interfere with the church on Passover.

Once the officials left, he told the Caller they did not come back and didn’t give him any tickets or contact him at all. But Pawlowski said some police officers came up to him on the street “feeling ashamed for their colleagues,” and told him “this was bad, there was no need for something like this.”

If the police want to come to his church in their capacity as law enforcement, Pawlowski said he is willing to make arrangements with them. However, he said they should not come with their guns, tasers and handcuffs.

“This is unacceptable,” he continued. “Even during the times of the Middle Ages, the knights were commanded to leave their swords outside the church, they were not allowed to enter the church. But these days, nothing is holy for those people. They just walk in like it’s a restaurant.”

This is the first time the officers have walked inside the church, but Pawlowski said that they have appeared in the parking lot multiple times and even blocked it one time so that parishioners could not enter.

“What happened on Saturday is just the tipping point of the harassment and intimidation I have been enduring for months,” he added. (RELATED: Boris Johnson: ‘Tougher Lockdown Restrictions Probably On Way’ Amid Rise In COVID-19 Cases)

The pastor said that he doesn’t know what they want because he claims they don’t talk to him and have never reached out to set up a meeting, but he assumes that they want to see how many people he has at the services and if they are wearing masks.

“The concern was that the people in attendance were not adhering to the government’s COVID-19 public health orders, which are in place to ensure everyone’s safety,” the Calgary Police said in its statement.

“In attending public spaces, private homes, and businesses, we continue to strive for voluntary compliance with public health orders where that makes sense,” the police continued. “The majority of Calgarians are understanding and cooperative.”

According to the statement, Calgary Police are asked to attend some calls “in an effort to help keep the peace due to high levels of conflict between citizens and health inspectors.”

“I grew up in Poland under the boot of the Soviets, behind the Iron Curtain,” Pawlowski said. “What I see right now, I see everything escalating and moving to the new level. They’re acting just like the Communists were acting when I was growing up when the pastors and the priests were arrested, and some were murdered. Many were tortured.”

“That’s why I say what I say,” he continued. “Because I see a repetition of history.”

Pawlowski didn’t expect the video he took to go viral but said that he hopes it gives others hope and courage to stand up to the authorities.

“I simply say, enough. And I want – I hope – that this video that so many people are talking about will give courage to other clergymen and other business owners to kick those Nazis out.”

Pawlowski’s phone has been going off “nonstop” with messages of support, he said.

“From my point of view, I’m not afraid of the disease,” he added. “Because my God is bigger, and I pray for the people that are still sick and that they recover. I don’t live a life of fear, because I have hope.”

“No tickets were issued at the time and it will be up to our partner agencies to determine subsequent enforcement activity in response to this situation,” the Calgary Police said. “We understand the pandemic has caused great disruption to all Calgarians in their professional and personal lives.”

“We do not wish to disrupt anyone’s holidays or religious or spiritual events, however we must support our partner agencies when called upon to help ensure everyone can safely celebrate these occasions.”