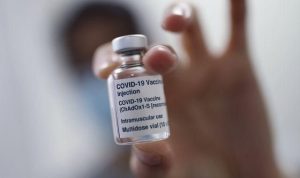 A UK trial testing the COVID-19 vaccine developed by AstraZeneca and the University of Oxford on children and teenagers has been paused pending additional data from a probe by the UK’s medicines regulator on possible links with rare blood clotting issues in adults.

University of Oxford’s Prof. Andrew Pollard said that there were “no safety concerns” in the trial of 300 volunteers aged 6-17 years, but that it will wait for further data to be released from the Medicines and Healthcare Products Regulatory Agency (MHRA)—the UK drugs watchdog—before giving any further vaccinations.

The trial began in February to assess whether the shot produces a strong immune response in those in the age group.

The pause came shortly after Marco Cavaleri, a senior official for the European Medicines Agency (EMA) suggested that there is a link between AstraZeneca’s COVID-19 vaccine and very rare blood clots in the brain, known as cerebral venous sinus thrombosis (CVST). The possible causes are still unknown, the chair of the vaccine evaluation team at the EMA told Italian daily Il Messaggero.

“It is increasingly difficult to state that there is no cause-and-effect relationship between vaccination with AstraZeneca and very rare cases of unusual blood clots,” he said. Cavaleri didn’t provide evidence to back up his comments.

“Whilst there are no safety concerns in the paediatric clinical trial, we await additional information from the MHRA on its review of rare cases of thrombosis/thrombocytopaenia that have been reported in adults, before giving any further vaccinations in the trial,” Pollard said, BBC News reported.

AstraZeneca has repeatedly denied a link between its vaccine and a higher risk of clots, citing previous studies.

The World Health Organization, who has backed the vaccine, said it is working with other regulators in closely examining the latest data. The U.N. agency said it isn’t likely to change its assessment that the vaccine’s benefits outweigh potential risks.

Currently, countries including Germany, France, Spain, Italy and the Netherlands have limited use of the vaccine to the older population, while some have banned it outright.

The United Kingdom has seen 30 apparent cases and seven deaths of the rare blood clots from more than 18 million doses of AstraZeneca’s vaccine.

Dr. Peter Arlett, the European Union medical regulator’s head of safety monitoring, said that the figure was “more than we would expect to see,” but that the normal background rate of the rare blood clots is uncertain.

The EMA is expected to release its findings on Wednesday or Thursday. It told BBC News its safety committee had “not yet reached a conclusion and the review is currently ongoing.”

The Epoch Times has reached out to AstraZeneca for comment.

Reuters contributed to this report.