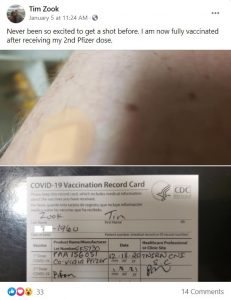 The Orange County Coroner’s office is investigating whether a second dose of a Pfizer vaccine contributed to the death of a local healthcare worker.

The Orange County Coroner Division told The Epoch Times in a statement Jan. 27 that the death of Tim Zook, 60, is under an open investigation and that additional tests within autopsy protocol will be conducted.

“After receiving all additional test results, we will use those findings along with autopsy findings to make a final determination into the cause and manner of death,” the statement says.  “If it’s determined there may be a correlation to the vaccine we will immediately notify the OC Health Care Agency.”

On Jan. 5, shortly after receiving the second dose of the COVID-19 vaccine, Zook shared a positive outlook on Facebook.

The South Coast Global Medical Center X-Ray technologist posted a photo of his bandaged arm and vaccination card alongside the caption: “Never been so excited to get a shot before. I am now fully vaccinated after receiving my 2nd Pfizer dose.”

Later that day, there were complications and Zook had to be put on oxygen, then a BiPAP machine, according to news reports. Several tests for COVID came back negative.

Just after midnight on Jan. 7, Zook was in a medically induced coma and a ventilator. After his blood pressure dropped he was transferred to the University of California–Irvine Medical Center.

Zook died Jan. 9 after several “code blue” diagnoses, according to his wife, Rochelle.

“We are not blaming any pharmaceutical company,” Rochelle Zook, a resident of the City of Orange, told The Orange County Register. “My husband loved what he did. He worked in hospitals for 36 and-a-half years. He believed in vaccines. I’m sure he would take that vaccine again, and he’d want the public to take it.

“But when someone gets symptoms two and-a-half hours after a vaccine, that’s a reaction. What else could have happened? We would like the public to know what happened to Tim, so he didn’t die in vain. Severe reactions are rare. In reality, COVID is a much more deadly force than reactions from the potential vaccine itself.

“The message is, be safe, take the vaccine — but the officials need to do more research. We need to know the cause. The vaccines need to be as safe as possible. Every life matters.”

South Coast Global Medical Center did not comment on Zook’s death to The Epoch Times, but forwarded a notice of condolences by email.

“Our deepest condolences are with Tim Zook’s family and loved ones,” the hospital’s chief executive Tim Whaley said. “He was a part of our family, too, and we are all grieving his loss.”