November Payrolls Preview: A Miss Will Be Good For Stocks But A Huge Miss Means Recession • JoshWho News

November Payrolls Preview: A Miss Will Be Good For Stocks But A Huge Miss Means Recession 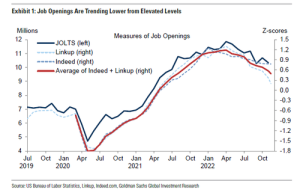 The jobs print on Friday is the final big event in what has been a very hectic macro week. Consensus is looking for a +200K printm down from 261K (Goldman is on the low end at +175k) with +0.3% average hourly earnings MoM, down from 0.4% prior. The unemployment rate is expected to remain unchanged at 3.7% while the Labor Force Participation rate increases modestly to 62.3% from consensus 62.2%.

In its full preview (see below and in report available to pro subs) Goldman’s forecast reflects continued declines in online job postings as well as weakness in Big Data employment indicators in November. Nonetheless, layoff activity outside of tech remains muted and Goldman believes that the recent increase in jobless claims mostly reflects seasonal distortions (we disagree).

More importantly, the whisper is for a (far) softer print after this week’s ADP miss, rise in weekly continuing claims, spike in challenger job cuts, and drop in ISM’s employment sub-index. Specifically for the jobs data, Goldman trader John Flood says that we are still primarily in a “bad is good” and vice versa set up, “but I am getting the sense we are approaching the end of the line in regards to this type of mind set.”

Caught my eye today when S&P sold off after ISM miss (49 vs 49.7 expected and now in contractionary territory). Growth/Recession concerns now being talked about more than how much higher rates can go after Powell’s speech yesterday (most investors finally have their heads around a 5%ish terminal rate that will be sticky for at least the majority of next year).

In terms of the market’s reaction to the headline jobs print, this is what the Goldman trader expects:

A somewhat contrarian take from Morgan Stanley’s sales team which writes that “it may be difficult to get a similar (large) reaction post NFP as post CPI given recent price action, lack of new risk taking, and the magnitude the CPI surprise that drove the equity rally. Short dated options suggesting the same thing.”

According to Morgan Stanley (whose forecast is for a 180K print) the implied move (1d straddle) for Friday is “only” ~1.15%, roughly half what it was into CPI when it was ~2%. The market is implying 30% extra variance for Friday (last two prints have realized 100%+), and this is combined with the fact that vols have come off meaningfully (VIX closed below 20). The market is pricing in no short-term vol premium – which is aided by flows that have been overwriting in nature (delta for sale / vol for sale).

I think the sweet spot for risk is +100-125k. This allows Fed to go 50, as part of a continued step down… this is what the Feds want to do and why they have had a hard time pushing back on easing financial conditions the last few weeks.

The bank also warns that in case of an NFP miss, the magnitude of a rally may be smaller than the decline on a large beat, given less incremental relaxation of the dovish narrative given 50bps is largely priced and SPX sits ~4000.

Having discussed the market reaction, here is a summary of what consensus expected tomorrow, courtesy of Newsquawk:

The rate of payroll additions is expected to cool once again, with analysts forecasting 200k nonfarm payrolls will be added in November (prev. 261k), while the unemployment rate is seen unchanged at 3.7%. Given that the Fed’s policymaking is currently centred around managing inflation, traders will be closely watching the wages metrics; the expectation is for wage growth to continue cooling, and this will likely form a key part of how traders will react to the data, with any upside in the wages measures likely to result in a hawkish market reaction, while any miss relative to expectations will likely incite a dovish reaction.

EXPECTATIONS: The US economy is expected to have added 200k nonfarm payrolls in November, further cooling from recent trend rates (three-month average 289k, six-month average 347k, 12 month average 442k). The unemployment rate is expected to be unchanged at 3.7%; analysts will be closely watching the participation rate, which has inched lower in the last two reports, currently at 62.2%. Similarly, there will also be attention on the U6 measure of underemployment, which rose one-tenth of a percentage point to 6.8% in October. Analysts note that in the November data, seasonal adjustments may be a factor weighing on jobs growth, particularly the adjustments to holiday hiring; these however may be partly offset by seasonal adjustments in the construction sector.

PROXIES: As a proxy, weekly data for the survey week that coincides with the official November jobs report showed initial jobless claims picking up slightly to 223k from 214k going into the October jobs data; continuing claims also ticked up to 1.51mln vs 1.44mln in the comparable October period. Further, although the ADP’s gauge of US national employment is difficult to use for comparison purposes, it showed a cooling rate of payroll additions, printing 127k from a previous 239k, and below the expected 200k.

WAGES: Rates of headline inflation have been easing as energy prices fall back, and wage growth has also been cooling. The pace of monthly average hourly earnings is also expected to ease, with analysts expecting growth of +0.3% M/M (prev. +0.4%), while the annual measure is seen falling a touch to 4.6% Y/Y from 4.7%. Average workweek hours are expected to be unchanged at 34.5hrs. The ADP’s measure of wage growth – again, not perfectly comparable with the BLS data, given that the ADP factors in bonuses while the BLS data does not – corroborates the slowing wages argument, with its most recent report stating that wage gains for job changers easing to 15.1% from 15.2%, while wage gains for job stayers pared to 7.6% from 7.7%.

POLICY IMPLICATIONS: Various labor market proxies suggest that the Fed’s policy tightening is helping to alleviate some of the tightness in the labor market, and also seems to be having an impact on slowing wage growth. The ADP’s chief economist said that “turning points can be hard to capture in the labor market, but the data suggest that Federal Reserve tightening is having an impact on job creation and pay gains,” with companies “no longer in hyper-replacement mode,” while “fewer people are quitting and the post-pandemic recovery is stabilizing.” The question is whether the easing labor market will be enough to derail Fed tightening; analysts at Oxford economics do not think so: “Job growth likely continued to slow in November but the implications for the Fed are minor,” it wrote, adding that “the moderating pace of job gains will be welcomed by the Fed but won’t alter its plans to continue to raise interest rates.” As this report is being published, money markets are discounting a 50bps rate hike at the FOMC’s December 14th confab, with rates expected to peak out between 5.00-5.25% in the middle of 2023. With the Fed in data-dependent mode, and inflation front and center of its policy decision making, traders have been using the playbook that any upside in price metrics (in the case of the jobs report, the wages measures) will see traders increase bets of a more hawkish Fed, while any downside in the wages numbers would likely result in a dovish reaction.

ARGUING FOR A STRONGER THAN EXPECTED REVIEW 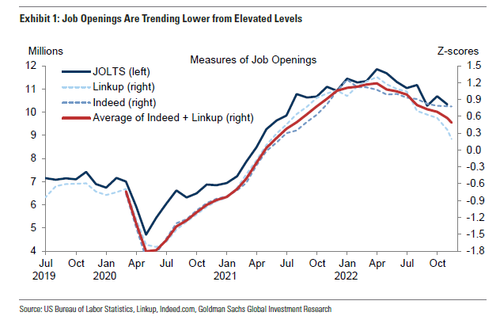 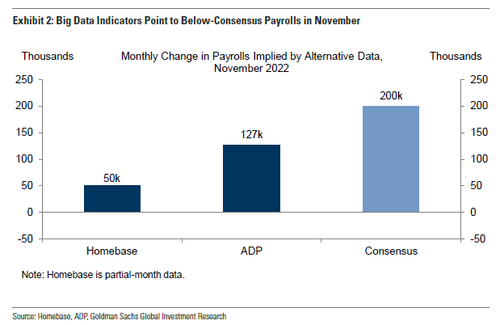 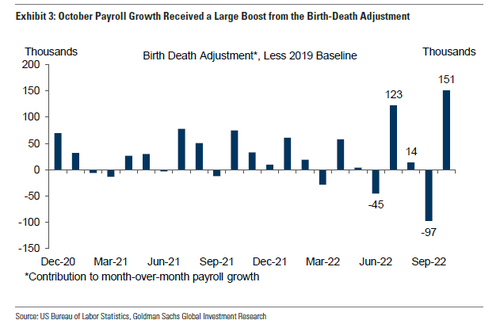 ARGUING FOR A STRONGER-THAN-EXPECTED REPORT:

More in the full reports available to pro subscribers