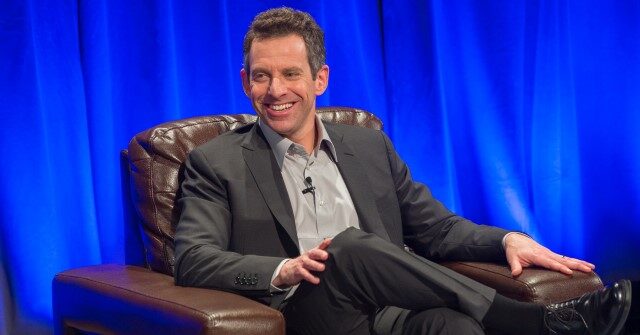 Supposed free-thinker and renowned atheist Sam Harris has admitted that he approves of the corporate media manipulating and misinforming the public to stop Donald Trump.

So much for pretending you believe in people hearing all the facts and making up their own minds about things. No, no … in order to preserve democracy, we must manipulate the people, lie to them by way of omission, and hide the truth.

Here it is, straight from the liar’s mouth:

Wow, you can actually watch Sam Harris self-destruct his career in 2 min 20 seconds.

“Taking down the New York Post’s [laptop article]? That’s a Left-wing conspiracy to deny the presidency to Donald Trump. Absolutely it was. But I think it was warranted.”pic.twitter.com/0bIoWJDdNa

HARRIS: [Trump’s corruption] doesn’t answer the people who say it’s completely unfair to not have looked at the laptop in a timely way and to have shut down the New York Post’s Twitter account: ‘That’s a left-wing conspiracy to deny [Trump] his [second term].’ Absolutely it was! Absolutely! But I think it was warranted.

INTERVIEWER: You’re saying you’re content with a left-wing conspiracy to prevent somebody from being democratically reelected president.

Harris doesn’t say, No, that’s not okay. Instead, he argues that it was a conspiracy out in the open, so not really a conspiracy.

Sam Harris is one of those mercenary leftists who likes to stroke those on the right desperate for anyone on the left to agree with them about anything. So, yeah, he’ll say a few things we agree with. But at heart, he’s a fascist leftist. Just another scumbag willing to not only deceive you, but openly brag about his willingness to deceive you — laugh right in your face — to show off for his left-wing pals.

And Harris’s willingness to deceive you and laugh about deceiving you is not his only sin. He also lies about Trump’s “corruption” being a fact when he has been convicted of nothing, despite six years and billions of dollars aligned against him in the media, local and federal law enforcement, and all the impeachments and January 6 kangaroo courts.

Whatever the scope of Joe Biden’s corruption is… If we could go down that rabbit hole for a second and understand he’s getting kickbacks from Hunter Biden’s deals in Ukraine or wherever else — China — it is infinitesimal compared to the corruption we know Trump is involved in.

“We know Trump is involved in.”

His only example is Trump University — lol — which he thinks is worse than a sitting president and vice president accepting kickbacks from foreign countries.

Trump is the most vetted man in the world, and they got bupkis, but Sam Harris — Mr. Free Thinker, Mr. Intellectually Honest — is lying about known corruption. There is no Known Corruption anywhere close to Trump.

What a phony Sam Harris is … and shame on those who have not always known that.

I mean, here it is, right out in the open. To get his way, Sam Harris is willing to lie to you, deceive you, manipulate information, and meddle in democracy. Moreover, the left and media are now so corrupt that he will pay no price for admitting to being corrupt beyond belief.

This is who these people are.

There is no low they will not hit to get their way, and admitting to that is now a badge of honor among the establishment.

The whole establishment needs to come down—all of it.