After last month’s jarring 12.6% tumble, which sent the SAAR to the lowest level since Jan 2016, US new home sales were expected to slide again if at a far more moderate pace: instead, we got another shocker because just minutes after Case-Shiller confirmed the first sequential drop in US home prices since 2012, the Census Bureau reported that in August, new homes unexpectedly soared by 28.8% – the 2nd biggest monthly increase on record (only behind the 30.6% spike in June 2020)  smashing expectations of a -2.2% drop, and a massive reversal from last month’s upward revised -8.6% drop.

And so after 6 declines in the past 7 months, the actual SAAR number of new home sales exploded higher from 532K, the lowest in six years, to 685K, the highest since March!

Thanks to the unexpected surge in sales, the supply of new homes – which last month hit the highest since 2009 – collapse by more than 2 months, to just 8.1 months of supply.

And as one would expect, the surge in sales took place as both Median and Average new home sales prices dipped, if just modestly. 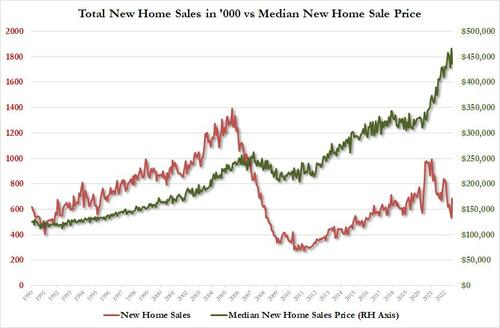