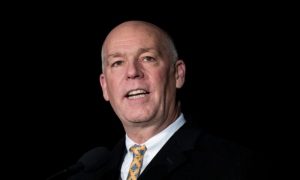 The governor of Montana, Greg Gianforte, has tested positive for the CCP virus, his office announced.

“After exhibiting mild symptoms on Sunday and out of an abundance of caution, Governor Greg Gianforte today was tested for COVID-19 and received a positive result,” the Republican governor’s office announced in a statement late Monday.

Gianforte’s wife Susan has shown no symptoms and is awaiting her test results.

The CCP (Chinese Communist Party) virus from Wuhan, China, causes the disease COVID-19. Symptoms appear about 2-14 days after exposure to the virus and include fever or chills, cough, difficulty breathing, fatigue and body aches, headaches, and more, according to the Centers for Disease Control and Prevention (CDC).

Gianforte will be isolating for 10 days, following his doctor’s instructions. He has canceled all in-person events and will be working from his home in Bozeman at this time.

“As a precautionary measure, the governor’s staff will be tested early Tuesday morning,” Gianforte’s office announced. “The governor and his staff have been tested regularly since he was sworn into office January.”

Gianforte previously received a vaccine for the CCP virus at the beginning of the month. In a Twitter post, he announced that he had received a vaccine shot at a local Walgreens pharmacy and said that the process was “quick, easy, and painless.” Gianforte also said that the vaccine is “safe, effective, and accessible to all Montanans 16 and older.”

Under emergency use authorizations, those 16 years old or above are authorized to receive the Pfizer-BioNTech vaccine, according to the CDC.

The Moderna and Johnson & Johnson vaccines are authorized for emergency use for those aged 18 or over.

Several other state governors have previously tested positive for the CCP virus, including Alaska Gov. Michael Dunleavy and South Carolina Gov. Henry McMaster, who are Republicans, and Virginia Gov. Ralph Northam and Colorado Gov. Jared Polis, who are Democrats.