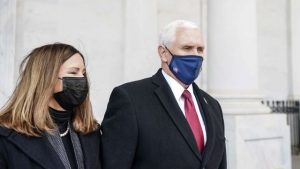 Former Vice President Mike Pence will take a step back into public life and a possible 2024 run with the launch Wednesday of the Advancing American Freedom advocacy group, designed to merge traditional conservative thinking with Trumpism.

It will seek to defend the Trump-Pence administration’s record while building what aides said would be a “winning formula for a broader coalition.”

The makeup of its advisory board reflects that mission, including figures from the Trump White House, such as Kellyanne Conway and Larry Kudlow, alongside key players from the broader conservative movement such as David McIntosh, president of the Club for Growth.

“Advancing American Freedom plans to build on the success of the last four years by promoting traditional conservative values and promoting the successful policies of the Trump administration,” Pence said in a statement to the Washington Examiner.

“Conservatives will not stand idly by as the radical left and the new administration attempt to threaten America’s standing as the greatest nation in the world with their destructive policies,” Pence said.

And it comes with the backing of former President Donald Trump himself.

“It was the most successful first term in American history,” he said in a statement sent to the Washington Examiner. “Nice to see Mike highlighting some of our many achievements!”

Pence has maintained a low profile since leaving office. He has spent time with his family while quietly developing a portfolio designed to maintain political influence.

He joined the conservative Young America’s Foundation and took on a role as distinguished fellow at the Heritage Foundation, triggering speculation he may be in line for its top job.

But aides now say, with a crisis at the border and an administration intent on raising taxes, the time is right to reemerge into the public eye.

His first public speech is due at the Palmetto Family Council’s annual fundraiser at the end of the month. The event is held in South Carolina — a key early primary state.

And his supporters say Pence is perfectly placed to synthesize a new platform incorporating traditional conservativism and the MAGA movement.

“There’s no doubt when the vice president joined the ticket in 2016, there was a whole new voter that Donald Trump brought in with his focus on China and trade, and he won over a lot of blue-collar votes in the Midwest,” said a Pence aide.

“This organization will focus on those winning policies that were at the center of that fusion between traditional conservativism and Trumpism,” the aide said.

The new group will be headquartered in Washington, D.C. Its programs will be developed around three pillars: American strength and security, covering immigration, Israel and Middle East peace, and “standing firm against adversaries”; American prosperity, including rebuilding the economy, energy independence, the administration’s tax cuts, and deregulation; and American liberty, including anti-abortion, school choice, and religious liberty issues.

Paul Teller, a long-standing member of Penceworld who was director of strategic initiatives for the vice president, will be its executive director.

Conway, senior counselor to the president in the Trump White House, said Pence was the ideal person for the job.

“I’ve worked alongside Mike Pence for 12 years in an official capacity but have known him for decades,” she said. “He has the heart of a servant and the mind of a policy wonk and through this issue advocacy group wants to ensure that the promise of America belongs to each and every one of us.”

Other members of the advisory board include Trump’s director of the Office of Management and Budget Russ Vought, former Wisconsin Gov. Scott Walker, and former Ambassador to Israel David Friedman. Chip Saltsman, Marc Short, and Marty Obst will be co-chairs.

Trump has not yet said whether he will run in 2024, but other potential candidates such as Mike Pompeo have begun visiting other early states.

Pence left office under a Trump-shaped shadow, publicly chastised for resisting the president’s demands to reverse the 2020 election result unilaterally.

So excited to announce the arrival of our first grandchild Avery Grace Pence born this week to our Amazing Daughter-in-Law Sarah and our son Michael! We Praise God that little Avery, her Mommy and Daddy are all doing just great! ❤️ pic.twitter.com/UuZxEVa5yx

But Trump’s endorsement of his new 501(c)(4) advocacy organization suggests a warmer relationship than is sometimes reported. And the former president telephoned to offer his congratulations when Pence’s first grandchild was born earlier this month, according to a source familiar with the conversation.

Aides shrug off speculation that the advocacy organization is a vehicle for Pence’s presidential ambitions, saying next year’s midterm election and developing a policy agenda are the priorities.

CLICK HERE TO READ MORE FROM THE WASHINGTON EXAMINER

“Now, we are in a period where the Biden administration in two and half months have really just abandoned the policies that led to so much prosperity in the past four years, and it’s time for him to reemerge and be the voice to take on those policies,” said one.