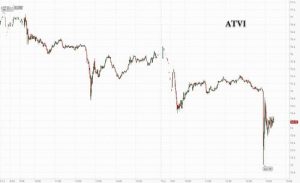 As if a million merger arbs suddenly cried out in terror and were suddenly silenced.

Just before 2pm ET, the US Federal Trade Commission confirmed earlier rumors when it announced that it had voted 3-1 to sue to block Microsoft’s $69 billion acquisition of gaming giant Activision Blizzard, saying the tie-up between the Xbox maker and popular gaming publisher would harm competition in the gaming market.

The commission voted to proceed with the complaint, which will be filed in its in-house court Thursday, in a closed-door meeting, said two BBG sources.

The full statement is below:

Agency alleges that maker of Xbox would gain control of top video game franchises, enabling it to harm competition in high-performance gaming consoles and subscription services by denying or degrading rivals’ access to its popular content

The Federal Trade Commission is seeking to block technology giant Microsoft Corp. from acquiring leading video game developer Activision Blizzard, Inc. and its blockbuster gaming franchises such as Call of Duty, alleging that the $69 billion deal, Microsoft’s largest ever and the largest ever in the video gaming industry, would enable Microsoft to suppress competitors to its Xbox gaming consoles and its rapidly growing subscription content and cloud-gaming business.

In a complaint issued today, the FTC pointed to Microsoft’s record of acquiring and using valuable gaming content to suppress competition from rival consoles, including its acquisition of ZeniMax, parent company of Bethesda Softworks (a well-known game developer). Microsoft decided to make several of Bethesda’s titles including Starfield and Redfall Microsoft exclusives despite assurances it had given to European antitrust authorities that it had no incentive to withhold games from rival consoles.

“Microsoft has already shown that it can and will withhold content from its gaming rivals,” said Holly Vedova, Director of the FTC’s Bureau of Competition. “Today we seek to stop Microsoft from gaining control over a leading independent game studio and using it to harm competition in multiple dynamic and fast-growing gaming markets.”

Activision is one of only a very small number of top video game developers in the world that create and publish high-quality video games for multiple devices, including video game consoles, PCs, and mobile devices. It produces some of the most iconic and popular video game titles, including Call of Duty, World of Warcraft, Diablo, and Overwatch, and has a combined 154 million monthly active users around the world, according to the FTC’s complaint. Activision currently has a strategy of offering its games on many devices regardless of producer.

But that could change if the deal is allowed to proceed. With control over Activision’s blockbuster franchises, Microsoft would have both the means and motive to harm competition by manipulating Activision’s pricing, degrading Activision’s game quality or player experience on rival consoles and gaming services, changing the terms and timing of access to Activision’s content, or withholding content from competitors entirely, resulting in harm to consumers.

The Commission vote to issue the complaint was 3-1, with Commissioner Christine S. Wilson voting no. A copy of the administrative complaint will be available shortly.

And here is the response from ATVI CEO Bobby Kotick:

I wanted to provide a brief update on our pending merger with Microsoft. This week the U.S. Federal Trade Commission (FTC) announced its decision to challenge the deal. This means they will file a lawsuit to block the merger, and arguments will be heard by a judge.

This sounds alarming, so I want to reinforce my confidence that this deal will close. The allegation that this deal is anti-competitive doesn’t align with the facts, and we believe we’ll win this challenge.

Thanks to the hard work by all of you every day, we’re on a strong path, bringing epic joy to players around the world with what I believe are the greatest games in the industry. At the same time, the competitive landscape is shifting, and, simply put, a combined Microsoft-ABK will be good for players, good for employees, good for competition and good for the industry. Our players want choice, and this gives them exactly that. You can read more about the specifics on those points in this update we recently shared with you.

We believe these arguments will win despite a regulatory environment focused on ideology and misconceptions about the tech industry.

Thank you for your dedication and creativity.

Having limped lower in recent weeks below where it had been trading around $80, already a wide discount to the $95 MSFT purchase price, ATVI stock slumped 2.5% to $74… 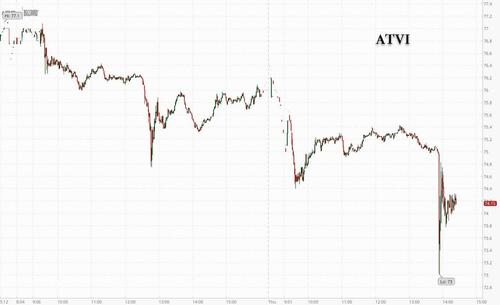 … while MSFT stock dropped about $2 from session highs some 2% higher on the session, to trade up just 0.9%. 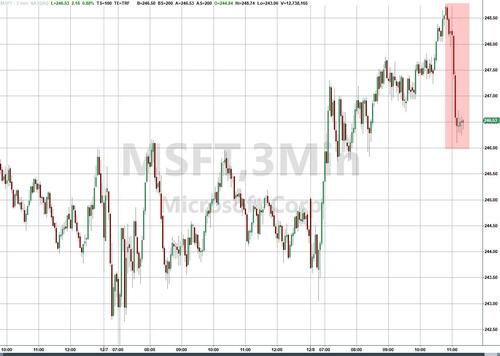 The drop in MSFT promptly hammered the Nasdaq and sent shockwaves across the entire market, pushing spoos down more than 25 points to near session lows around 3950 having traded at session highs of 3975 just moments earlier. 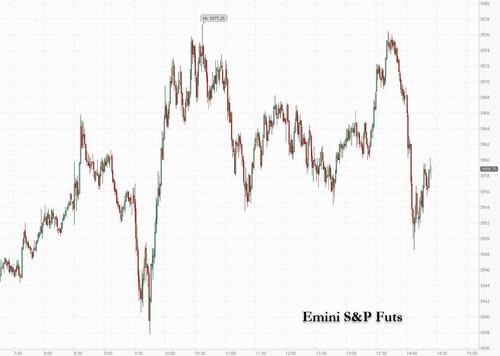