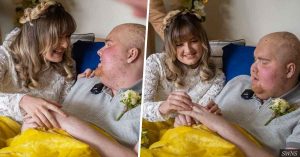 A university student with just days to live after being diagnosed with a brain tumor married his girlfriend in an emotional bedside service.

Owen Copland, 20, a drama undergraduate at Liverpool John Moores University and a budding actor, suffered headaches for around a month before being diagnosed with the disease in November 2020. He underwent a life-saving operation days after that and since then has endured radiotherapy along with additional surgeries.

However, Owen’s scans from early March showed significant growth in his tumor, and his doctors thus gave him an extremely bleak prognosis with potentially days to live. With the remaining time left, Owen told his loved ones that he wanted to marry his girlfriend of two years, Sarah Jones, 21, who has been by his side every step of the way.

Owen’s friends and family managed to arrange the marriage in just two hours. A bedside service was organized in his house at Liverpool, Merseyside.

Owen said he proposed to Sarah on Feb. 25 after getting a second opinion about his condition and realizing its severity. He said, “When I came home I saw my girlfriend and said, ‘I want to marry you.’”

The groom’s best man, Luke, attended with less than 24 hours’ notice and prepared “the most beautiful speech” Owen’s mom, Gill, 54, said she had ever heard. Although Owen, who has been supported by Brain Tumour Research, was confined to his bed, he was able to marry his beautiful bride and also enjoy the festivities, which included live music, flowers, and food.

Recalling the ceremony, Owen said: “It felt good to see my friends and hear my best man’s speech, who I asked to be my best man just the day before.”

“I’d been wanting to be on my game and speak to my friends online but because of Covid, I couldn’t see him,” Owen shared. “So to get a speech from my best man in person was emotional for both of us.”

Owen said the immense support from his family, particularly his mother and sister Jane, 25, has been incredible.

“Before I took my family for granted and since my diagnosis I have wanted them there by my side which they have been,” Owen added. “I know they will never leave me or give up on me, I love them.”

Owen began suffering from headaches during the second lockdown owing to the CCP (Chinese Communist Party) virus, commonly known as the novel coronavirus, in October 2020, while studying in his final year of university.

Gill said at that time she tried to get a doctor’s appointment but due to the pandemic, she wasn’t able to. According to Gill, it wasn’t until she had rung for two ambulances and taken her boy to hospital three times that he was finally given a CT scan and diagnosed with a brain lesion.

After the CT scan, Owen underwent an MRI, which revealed an aggressive type of brain tumor. Thus on Nov. 10, 2020, he had a six-hour lifesaving operation. However, further tests showed the tumor was a Grade 4 Glioblastoma type—the most aggressive type. After being referred to The Clatterbridge Cancer Centre in Liverpool, an MRI revealed the tumor had spread to his spine.

On Feb. 25, 2021, Owen got a second opinion from a consultant clinical oncologist, who explained the outlook to give him an “understanding of just how bad everything was.” Despite his extremely bleak prognosis—an incurable tumor that could claim his life within a matter of days—the brave student has maintained a positive attitude throughout.

“I know there is no cure and the prognosis is bad but if I get told two weeks I’ll go for another week,” Owen said. “I just want to feel better but it is what it is and we’ll deal with it.”

On March 5, a doctor told Gill and Jane that the tumor was pressing against Owen’s brain stem, causing his heart rate to drop and that he could lose his life within a matter of days. Friends and family then rallied together to organize the wedding, which was a commitment ceremony as opposed to a marriage in the eyes of the law, just three days later.

Owen is now being cared for at home, while the treatment available is limited due to his advanced condition, and it’s thought he could pass away any day.

The student and his mom said they are speaking about their ordeal in order to raise awareness of brain tumors, which Owen’s mom said lacks funding.

“I passionately believe there should be more funding into research for brain tumors. He and others who are suffering deserve this change to happen,” Gill said. “While all cancers and illnesses are devastating, this is in a league of its own. It’s like wading through mud.”

The family is sharing Owen’s journey on a Facebook page, called “Owen & Glioblastoma.”

In a recent post, the family thanked all those who were supporting Owen and their efforts to spread awareness about the disease. “We love the support and kind words we receive every day & most of all we love sharing them with Owen,” they added.

The Epoch Times Staff contributed to this report

Share your stories with us at emg.inspired@epochtimes.com, and continue to get your daily dose of inspiration by signing up for the Epoch Inspired newsletter at TheEpochTimes.com/newsletter