Liberty Is Worth The Fight • JoshWho News

Liberty Is Worth The Fight 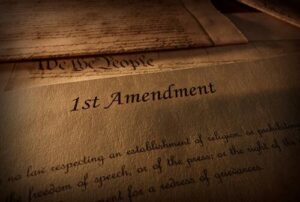 Authored by J.B.Shurk via The Gatestone Institute,

“There comes a time,” Martin Luther King Jr. advised, “when one must take a position that is neither safe, nor politic, nor popular, but he must take it because conscience tells him it is right.”

Moral imperative, in other words, outweighs personal security, political correctness, and the psychological comfort of identifying with the crowd. During troubling times of human violence and suffering, it is always the lonely few — either blessed with innate courage or made resolute through private, grinding struggle — who dare to take a stand against encroaching evils tacitly accepted by the many. Such is the power of individual free will when man chooses principle as his guide.

Today is a time for the voices of the few to coalesce. What is at stake is nothing less than individual control over one’s life, liberty, property, privacy, and pursuit of happiness. Freedom of speech hangs in the balance, as do freedom of religion, freedom of the press, and the right of the people peaceably to assemble, and to petition the government for a redress of grievances. That many of these natural rights were recorded together in America’s First Amendment is not accidental. They are intimately interwoven. To weaken any one, weakens them all.

To forbid a football coach from publicly praying is to force him to sacrifice both his religious freedom and freedom of expression; if the very things that most define us are relegated to the home, then religious identity and freedom of speech do not have far to roam.

Aside from the U.S. Department of Homeland Security’s efforts to create an official “Disinformation Governance Board” to “combat” free speech antithetical to the government’s point of view, reports show that DHS employees have regularly met with Facebook and Twitter to suppress and censor certain facts and opinions in online discussion of numerous issues dominating public debate — including such broad topics as the U.S. withdrawal from Afghanistan, Covid-19, and “racial justice.”

To hand Western governments the power to decide what may or may not be published on social media deprives the public square of both unfettered free speech (within the bounds of Brandenburg v. Ohio) and a truly free press. To empower government actors with the authority to designate some thoughts as “mis-,” “mal-,” or “dis-” information — in other words, to permit politicians and bureaucrats to arbitrate what is true or false, helpful or harmful, protected opinion or malicious deception — is to abrogate entirely the protections of America’s First Amendment. To use private sector cutouts as the government’s implicit censors is not only a nefarious and cynical workaround — it is also illegal to act as a government agent to enable it to circumvent constitutional prohibitions, in this instance limiting who may participate in the modern-day equivalent of the traditional town square.

To censor dissenting views on experimental, yet coerced, medical treatments, two-tiered economic shutdowns (during which “Big Box” stores are inexplicably “allowed” to operate while economically vulnerable neighborhood shops are not), is mass censorship in the name of public health, shielding from scrutiny monstrous tyranny draped in the false cloak of the “greater” or “common good.” 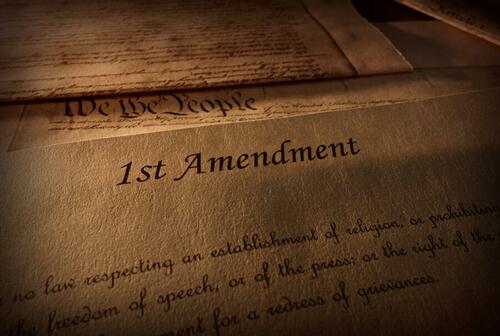 When governments censor dissenting opinions from public debate, they serve no greater interests than their own. When governments claim to act for the people’s “own good” while banning contrary points of view, they all too often augment their own power at the public’s expense. When governments camouflage their orders behind claims of “good intentions,” then the most atrocious evils can be blissfully undertaken.

If you allow yourself to be blinded by any government’s “good intentions,” your eyes may one day be flooded with the sights of unspeakable harms. Hugo Chávez’s socialist government made many such promises “for the good” of the people of Venezuela, while his government’s endless public betrayals have left that nation’s citizenry suffering immeasurably still today.

This is a pivotal moment in human history, when centuries of steady progress toward human emancipation and individual liberty will either find new, urgent momentum or suffer regrettable retreat. Either freedom means something, or it does not. Either personal agency resides in the hands of every individual, or it disappears behind a view of people as nothing more than parts of collective groups. Either self-government demands each citizen have a voice, or the many must obey the edicts of an ever-expansive government run by the few. Either citizens are uniquely empowered to control the direction of their governments, or legal citizenship and nationality mean nothing at all. These are the simple yet serious stakes we face today. They are clear, unforgiving, and unavoidable.

The reason we are here now at this intersection in the history of liberty is not complex: it is the outcome of human nature. For most people in the West today, war and its painful consequences are unknown or have been distorted by time. Although violence and bloodshed continue uninterrupted in many places around the world, most Westerners have long been spared the horrors of war directly outside their doors. The difficulty for humans to appreciate what they cannot see has made them careless in preventing what they do not intimately know.

Many politicians cavalierly embrace totalitarianism once again. Citizens, once aware of the attendant dangers to peace when large corporations and national governments work hand in glove to push “politically correct” ideas upon society, are apparently so far removed from the twentieth century’s vivid lessons in fascist, communist, and Nazi propaganda that they fail to see the harm in bureaucrats and officeholders dictating to the public what it may believe.

Many Westerners have forgotten that freedom of speech and personal liberty — far from menacing “microaggressions” deserving of sanction — are the surest safety valves for mediating animosities inherent within any society before outright violence is unleashed in their stead. For many people, decades of relative peace have transformed hard-fought Western freedoms into disposable inessentials. Governments and international corporations think little of the risks to social cohesion — and probably do not even care — when they purposefully manipulate populations with mass media propaganda meant to reinforce the elite agendas of the World Economic Forum covering everything from energy use and food production to medical mandates and health passports. The same allure of ultimate power and control that fueled both world wars remains all too enticing.

Governments already acclimated to universal public surveillance and warrantless online tracking see central bank digital currencies, human tracking implants, and the imposition of social credit scores all on the horizon and believe the time for total control over citizens is near, so long as they are the ones doing the controlling.

As always, technology’s liberating benefits are accompanied by its powers to threaten populations and to suppress information that its directors may abhor. Radio and television connected the world as never before, but mass communication also rapidly fueled the rise of dictators and the spread of public indoctrination to new heights. Nuclear energy has provided both abundant power and the potential for apocalyptic destruction. Personal computers, smartphones and the internet have given ordinary individuals megaphones through which to articulate new ideas, yet that same cyberspace has opened up a brand new battlespace for government surveillance, propaganda, and mass manipulation.

Rather than ensuring citizens’ economic security and fostering freer markets, some governments appear to view technology as providing not only more efficient tools for redistributing wealth, limiting personal income, and levying taxes but also the means for creating a technocratic system of total surveillance in which bureaucratic control over what consumers buy and sell and the implementation of social credit scores can both reward “politically correct” behaviors and punish “wrong” points of view.

Technological advancement provides the means for both greater human freedom and absolute human abasement. When governments are allowed to make that choice for us, they will often choose the latter. Their concern is not our personal liberty but their power. For human freedom to flourish, only the people are capable of keeping government power in check.

It is therefore imperative that Westerners not lose sight of the most important battle already raging — one pitting individual freedom against total state control. Every other issue should be scrutinized through this lens. We are, indeed, at an intersection in the history of human liberty. Even if only a small minority comprehend what is now at risk, those few would do well to fight for preserving our individual freedoms against those governments and corporations working diligently to dilute them.

Either the light of liberty is once again rekindled, or it will be extinguished until a later day.