Rep. Kevin McCarthy (R-CA), the likely next Speaker of the House, will visit the border on Tuesday to spotlight President Joe Biden’s failure to curb the inflow of terror suspects and fentanyl.

On “Tuesday, I’m going down to the border again,” McCarthy declared at a Saturday meeting of Republican supporters  in Las Vegas, adding:

We’re gonna get a new update [on the border] because you know why? When I become Speaker [of the House], we’re going to move a hearing down on the border, and I’m going make it bipartisan on both sides. Another promise I’ll make you — I will not allow [Biden] to ignore it. As Speaker, I’ll have the meeting there. Then make them all show and see what’s happening.

Last week, Biden’s pro-migration border deputies announced they will not oppose a judge’s decision ending the Title 42 legal barrier at the border.

Once the legal is removed, Biden’s wealthy deputies will allow millions more migrants to crowd into U.S. workplaces and rental markets. That huge inflow will further cut ordinary Americans’ wages and spike their housing costs.

NEW: Thermal drone video from our team in Eagle Pass, TX shows a large group of migrants crossing illegally into private property early this morning.
Per CBP source, there have been over 1,400 illegal crossings in the Del Rio sector in the last 24 hours & 69,000 since 10/1. pic.twitter.com/N1FjKVVuDa

McCarthy’s promises on immigration played a central role in the GOP’s narrow win in the midterm elections.

So there is little chance he will allow many GOP legislators to endorse pro-migration policies.

For example, 16 percent of GOP voters –or one in six — told a Harvard-Harris poll that immigration was “the most important” issue in determining their vote.

That percentage beat the 10 percent who cited “crime/safety issues,” and was more than twice the 7 percent share of GOP voters who picked “protecting democracy,” according to the November 16-17 survey of 2,212 registered voters.

“There is no question that Republicans are more restrictionist than Democrats,” the Wall Street Journal admitted on November 18. “Among GOP voters, 49% want to decrease immigration levels while 13% want to increase them,”

The critical support from migration opponents was won after McCarthy embraced the 2022 consensus report by immigration reform groups.

“Republicans have a clear plan to secure our border: Combat illegal immigration by requiring proof of legal status when applying for a job,” said a subsequent McCarthy-backed GOP campaign document. The document was sent to Republican candidates in early August.

The August document also included other important commitments by a Republican majority to curb illegal migration, such as restoring the Remain in Mexico program and ending the “catch and release” policies that allow illegal migrants into U.S. jobs and housing via various border loopholes. 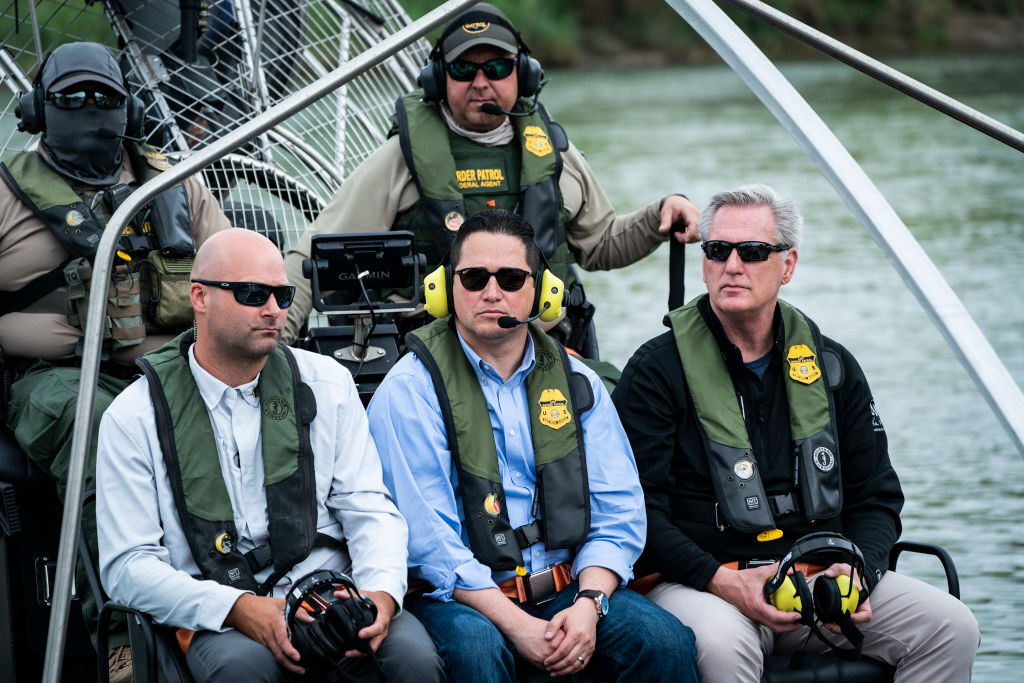 You can’t tie the two [amnesty and border security]. You’ve got to just go fix the border to start out before you can deal with immigration. I just think it’s too far broken. I don’t think anyone’s going to believe you if you tie the two together.

But GOP’s 2022 election campaign downplayed the painful pocketbook impact of migration on blue-collar and white-collar families. Instead, it emphasized drugs, E-Verify, terrorists, and crime. That zig-zag helped the party to maneuver between populist voters and pro-migration supporters and donors.

You know what the equality of 300 Americans is? What’s equal to that? An airliner crashing. What happened if an airliner would crash every day in America? We would all wake up and say ‘We have a crisis!” Would we not? And we want to do something about it.

We’re gonna get a new update [on the border] because you know why? When I become Speaker [of the House], we’re going to move a hearing down on the border, and I’m going make it bipartisan on both sides. Another promise I’ll make you — I will not allow [Biden] to ignore it. As Speaker, I’ll have the meeting there. Then make them all show and see what’s happening.

Do you know what is happening — fentanyl [is the]  number one killer of Americans between the ages of 18 and 45. That’s our most productive years in an economy. Those are the years of the individuals who serve in the military to defend us. It makes me wonder why would somebody target that generation in America. We should stop it and stop it now.

“The Centers for Disease Control and Prevention recently reported more than 100,000 drug overdose deaths during the 12-month period ending in April 2021, a 28.5% increase over the prior year,” said a December 2021 report in StatNews.

Pro-migration groups, however, dispute the GOP’s claim that Biden’s border policies have spiked the transfer of fentanyl. Instead, they say the data shows that most of the fentanyl is smuggled inside vehicles that are part of the huge bidirectional flow of trucks between U.S. consumers and Mexican producers.

The overwhelming majority of fentanyl is smuggled into the United States through ports of entry, most commonly in passenger vehicles driven by US citizens.

Nationwide more than 100,000 Americans die “Deaths of Despair” after losing jobs wealth and hopes to free trade, cheap-labor migration, and their own failings.

But elite politicians can divorce themselves from the damage because they expect to import replacement workers and consumers.

Since about 1990, the U.S. establishment has adopted a policy of Extraction Migration to pull migrants from poor countries to serve the U.S. economy as workers, renters, and consumers. This strategy prevents wage-raising tight labor markets, and so it shifts vast wealth from ordinary people to investors, billionaires, and Wall Street.