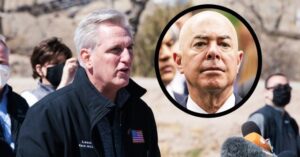 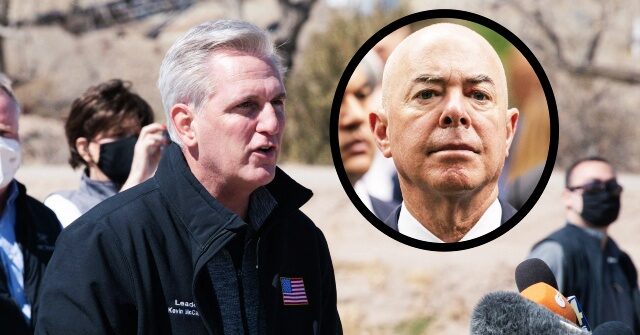 House Minority Leader Kevin McCarthy, hoping to become the next Speaker of the House, called for the resignation of President Joe Biden’s Department of Homeland Security (DHS) Secretary Alejandro Mayorkas, declaring him a threat to the nation’s sovereignty. If Mayorkas resists, McCarthy threatened  House Republicans will consider impeachment proceedings against him.

McCarthy made the announcement during a press conference along the United States-Mexico border, where he noted that under Mayorkas’s leadership, the U.S. has seen “the greatest wave of illegal immigration in recorded history, with an estimated 5.5 million border encounters since Biden took office in February 2021.

“Our country may never recover from Secretary Mayorkas’s dereliction of duty,” McCarthy said. “This is why, today, I am calling on the Secretary to resign. He cannot and must not remain in that position.”

“If Secretary Mayorkas does not resign, House Republicans will investigate every order, every action, and every failure will determine whether we can begin [an] impeachment inquiry,” McCarthy continued.

McCarthy vowed that House Republicans will hold hearings into Mayorkas’s actions as DHS chief at the southern border to ensure that House Democrats are unable to avoid visiting the region.

“We will hold our hearings at the border so the Democrats can no longer hide from the crisis they have created,” McCarthy said.

Mayorkas, McCarthy said, has “empowered cartels, human traffickers, and terrorist organizations all around the world” while most recently ensuring that the U.S. will experience a “tsunami” of illegal immigration with the Biden administration’s refusal to appeal a federal court decision that ends Title 42 — the public health authority that has kept a lid on record-shattering illegal immigration levels since 2020.

“Now let me be clear, those responsible for this disaster will be held accountable. I’ve spoken today again to Congressman Jim Jordan and James Comert, the future chair of the Oversight and Judiciary Committee,” McCarthy said.

“They have my complete support to investigate the collapse of our border and the shutdown of [Immigration and Customs Enforcemnet] enforcement nationwide,” McCarthy continued.

Since Biden took office, his DHS with Mayorkas at the helm has released roughly 1.4 million border crossers and illegal aliens into American communities. This expansive Catch and Release operation has been carried out mostly through a little-known parole program previously used by the Obama administration.