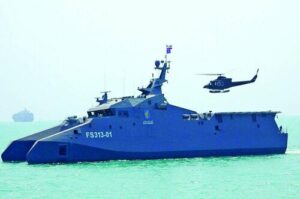 A new Iranian-built advanced tech combat patrol vessel has just been put into service by the IRGC Navy. Iran’s military is claiming that the vessel, named the “Shahid Soleimani” – has a stealth capable body and design, giving it “radar-evading stealth technology, meaning that it has a very low level of radar cross-section,” state sources say.

According to Bloomberg, citing state media, the vessel is the country’s first to be equipped with a “vertical launch, short- and medium-range air defense system” – and was unveiled at a Monday ceremony at the port city of Bandar Abbas, overseen by Major General Mohammad Bagheri, the Chief of General Staff of the Armed Forces, and IRGC chief Hossein Salami.

The Shahid Soleimani is further being touted as capable of possessing higher maneuverability and smaller radius of rotation given the unique designed, compared to ships of similar size. Bagheri described of the new naval vessel, “The design and construction of this vessel was done by the elite youth and university graduates of the Islamic Republic of Iran, and it has a stealth-equipped body with a very low radar cross section, which can be considered as a national achievement for the country.”

Earlier this summer, as construction was being completed, the naval analysis site USNI News previewed the following capabilities based on available radar images of the vessel seen from overhead:

These missile boats offer more conventional capabilities than the myriad of small boats operated by the IRGC-N. They could operate as command vessels for swarms of smaller boats armed with rockets, torpedoes, mines, lightweight anti-ship missiles and drones. They could also operate independently, offering a longer-range arm of the IRGC. Either way, the two new types of catamaran are likely to spearhead the IRGC-N’s modernization.

While Iran struggles to build larger warships and incorporate modern weapon systems, it continues to innovate and modernize in other fields. Its ballistic missiles are treated with respect, as are its drones and cruise missiles. Iran can build submarines and, now, modern missile corvettes.

Additionally this week Bagheri issued fresh warnings to the United States and Israel, citing the Iranian navy’s ability to secure the strategic Strait of Hormuz. The top general said in addressing naval officers:

“Also, the Zionist regime’s joining the terrorist U.S. Army’s Central Command can create threats for us. We do not tolerate Zionism, and in addition to protesting through the country’s foreign policy apparatus, we declare that we will not tolerate such development of espionage and creating threats, and we will not make any compromises regarding the rights of the Iranian nation and the security of our seas and land.”

First Video of IRGC Navy Shahid Soleimani class catamaran corvette.
The vessel is claimed to have VLS for AD missiles with 150 km range. A helipad with Bell-206 helicopter and crane for supporting IRGC fast attack crafts can be seen at the first glance. pic.twitter.com/e8eypVIKV4

The remarks came a day after the United States flew two nuclear-capable B-52H Stratofortresses over the Middle East on Sunday in a message aimed at Tehran. Three Israeli F-16 fighter jets had briefly joined the US mission as the bombers made their way “through Israel’s skies on their way to the (Persian) Gulf,” the Associated Press reported.

Last week the US and Iran had multiple encounters and intercept incidents in the Gulf region, with the Iranians claiming to have seized and then let go of several US sea drones. The second Friday incident took place in the Red Sea, involving the intervention of a US warship and helicopter which forced an Iranian patrol to release a pair of seized small surface vessels seized earlier the same day.