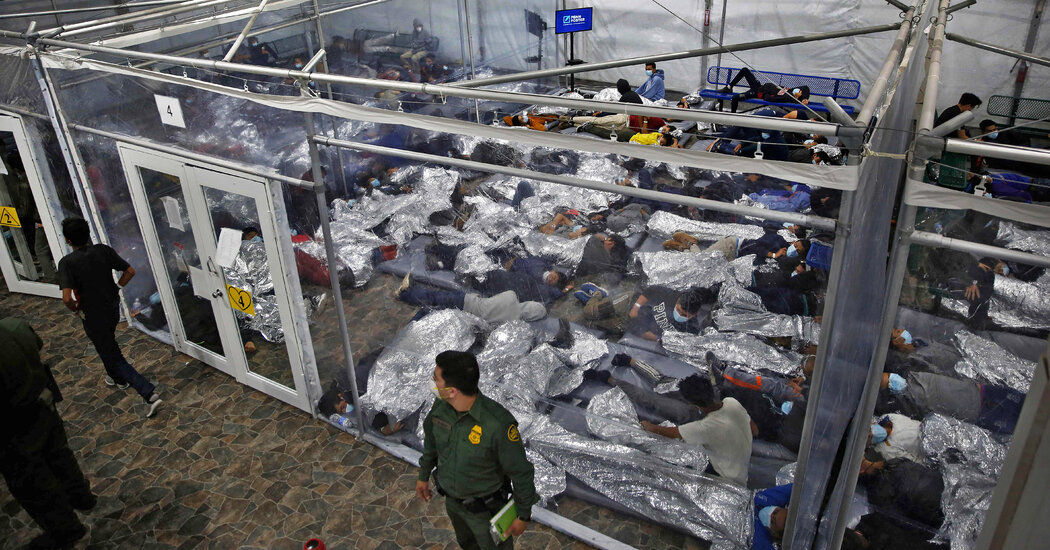 Migrant children and families are sleeping shoulder to shoulder on mats in a Texas border facility designed for 250 people that is now holding more than 4,100, according to some of the first photographs to emerge from the crowded camp that has become a focal point of the Biden administration’s struggles to absorb thousands of new arrivals on the southwestern border.

Young children were being cared for by older siblings in a playpen area in the border processing facility at Donna, Texas, where a small group of reporters were allowed to enter for the first time on Tuesday to observe conditions at the camp, which U.S. officials admit has been overwhelmed by the growing numbers in recent weeks.

“As I have said repeatedly, a Border Patrol facility is no place for a child,” Alejandro N. Mayorkas, the secretary of homeland security, said in a statement. He said border agents were “working around the clock” to move migrant children out of overcrowded border facilities like the one in Donna and into government shelters before they were placed with family members or other sponsors.

Oscar Escamilla, the acting executive officer of the U.S. Border Patrol in the Rio Grande Valley, said “it would be better for everybody” if there were room to move the migrant children into government shelters.

“I’m a Border Patrol agent. I didn’t sign up for this,” Mr. Escamilla said as he looked at some of the younger children, many of them under 12, being housed at the facility.

“It’s so crowded in those pods that I can’t possibly put these young kids in those pods because they’re going to get hurt,” he said.

In one case, a 17-year-old migrant was caring for a newborn.

The tent structure at Donna was erected to help alleviate pressure on Border Patrol stations, where migrants must be processed before being released or transferred to other facilities. But new photos taken by Associated Press reporters and a camera crew allowed to enter on Tuesday painted a grim picture of conditions that were likely to worsen during a surge that shows no signs of abating.

Children, jammed hundreds to a single pod intended for fewer than 50, were lying down shoulder to shoulder across the 3,200-square-foot space, crumpled aluminum blankets covering some of them. Many of the pods held more than 500 children. In a playpen area, a 3-year-old girl was being tended to by her brother, 11.

About 3,300 of the migrants being housed at the soft-sided structure are children who have crossed the border without parents or other guardians in recent months. While most arrive with the name and telephone number of a family member whom they hope to join, U.S. authorities must process them at the border and then send them to a government shelter.

Transfers from the border are not keeping up with the pace of arrivals — children have been entering the country at the rate of 500 a day — which two shelter operators this week said was without any recent precedent.

In February alone, more than 9,400 minors, ranging from young children to teenagers, arrived without parents, a nearly threefold increase over the same period last year.

The Biden administration has established temporary facilities for the young migrants at convention centers in San Diego and Dallas, a coliseum and expo center in San Antonio, a former oil camp in Midland, Texas, and at Fort Bliss, Texas.

But it is still failing to quickly transfer the minors to the shelters, which are supposed to come with education programming and recreational space, unlike the sites managed by the Border Patrol.

More than 4,000 minors were stuck in such detention facilities for more than the maximum of 72 hours allowed under federal law, according to internal government documents.

The United States currently has more than 17,600 beds for the minors in tent camps, emergency facilities and shelters, according to the internal documents. The administration is projecting it will need more than 35,500 beds by the end of May.

Additional facilities to shelter the minors are being scouted, including a Crowne Plaza hotel in Dallas, a convention center in Orange County, Fla., and a church hall in Houston.

The shelter system, which normally has a 14,000-bed capacity, has been struggling to expand after the coronavirus pandemic limited how many children it could house. The administration is releasing roughly 250 minors a day to sponsors, organizations and foster homes, according to a document obtained by The New York Times.

There are more than 12,000 migrant children presently in government shelters. Another 5,160 are stranded in Border Patrol processing facilities like the one at Donna because there are not enough vacant beds to accommodate them all, and children already in roomier shelters operated by the Department of Health and Human Services are not being released quickly enough to make room for hundreds more crossing the border every day.

They are released from government custody after a guardian provides dozens of pages of documents and is screened, to ensure that the children are not being trafficked and will be safe.

“There’s a pull factor. They know that we’re releasing them,” Mr. Escamilla told reporters in Donna. “They know that right now there’s nothing stopping them. We’re not going to deport them back to their country so they keep coming.”

He said that 250 to 300 children were entering the Donna facility each day — and far fewer were departing. The remainder of the migrants housed at the camp — a total of about 700 — are adults and children traveling together as families.

The children are not tested for the coronavirus by the Border Patrol unless they exhibit symptoms. Mr. Escamilla said that 14 percent of the children had tested positive when they were later transferred to shelters.

The tent facility at Donna, erected in February, is the biggest emergency processing center on the border. Mr. Escamilla said it was costing $16 million a month to run, not including medical care and personnel contracts.

Nurses were on hand to perform physical and mental health assessments. They checked the children for lice, scabies and fever and asked if they had suicidal thoughts. The children were fitted with bracelets with a bar code that kept track of when they had showered and any medical conditions.

As part of the processing, children age 14 and older were fingerprinted. During the intake process, Border Patrol agents issued them notices to appear in court, where they will be considered for deportation or asylum.

More than 2,000 of the children have been held for more than 72 hours, according to Mr. Escamilla, in violation of the law.

On average, he said, the minors were spending 133 hours in the facility before being transferred to a shelter. Among them, 39 had been there for at least 15 days. One child had been in the tent center 20 days.

Finding suitable housing has been a challenge for previous administrations as well. The Obama administration struggled to house thousands of children and families who began crossing the border in large numbers in 2013, and the Trump administration was criticized for processing families under a road overpass and placing migrant children in a filthy, overcrowded facility in Clint, Texas.

Amy Cohen, a psychiatrist who works with migrant children and families, said the photographs from Donna were reminiscent of those depicting conditions in Clint, which drew widespread condemnation from physician and child-welfare groups.

“The conditions are antithetical to the well-being of children, particularly vulnerable minors,” said Dr. Cohen, who runs an organization called Every Last One that assists migrants.