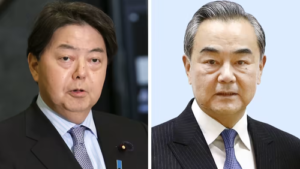 In the latest significant sign of fast deteriorating Japan-China relations, China’s foreign ministry announced Thursday that its top diplomat will no longer meet with his Japanese counterpart, which was expected in a scheduled meeting today on the sidelines of the ASEAN summit in Cambodia.

“We are concerned by recent and announced threatening actions by the People’s Republic of China (PRC), particularly live-fire exercises and economic coercion, which risk unnecessary escalation,” the G-7 communique stated.

Beijing reacted angrily, underscoring that it was Pelosi’s trip that violated China’s “sovereignty” and the status quote One China principle.

Making matters worse on Thursday, missiles launched over and toward Taiwan as part of the PLA’s show of force and muscle flexing landed inside Japanese exclusive economic zone (EEZ) for the first time, according to Japan’s defense ministry.

According to details of the incident, “all five of the missiles that landed within Japan’s EEZ — which extends 200 nautical miles (370 kilometers) from Japan’s coast — had fallen into waters southwest of Hateruma Island in Okinawa Prefecture,” Japan Times writes.

And further, “In Okinawa Prefecture, Yonaguni Island — located just 110 kilometers from Taiwan — as well and Miyako Island, are home to Ground Self-Defense Force bases, while construction is currently underway on another base for surface-to-air and surface-to-ship missile units on Ishigaki Island.

Defense Minister Nobuo Kishi told a news briefing, “This is a grave issue that concerns our country’s national security and people’s safety.”

On Aug. 4, Japan’s Ministry of Defense announced that China had launched nine ballistic missiles into the waters surrounding Japan and Taiwan. Five of them landed in Japan’s EEZ. pic.twitter.com/cCyCGAPFbo

Tokyo’s leadership, like much of the West, has long been worried that any mainland China move on self-ruled Taiwan would set off an emergency across Japanese industries, given Taiwan is a prime semi-conductor maker and supplier, also as crucial shipping lanes off Japan would be blocked in such a scenario.