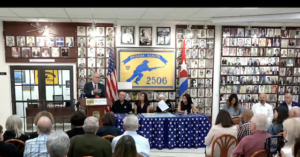 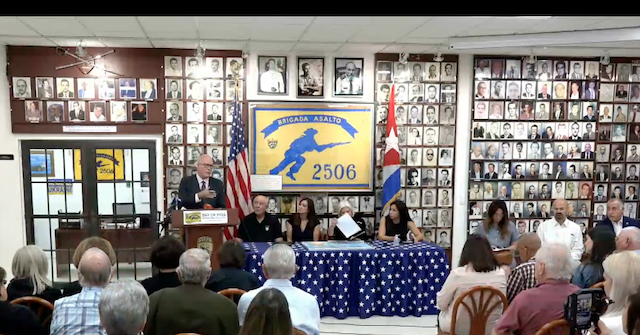 Leaders of the Cuban-American community in Miami held a press conference on Wednesday to protest the proposed sale of 18 Spanish-language radio stations, including iconic anti-communist station Radio Mambí, to a left-wing media network funded in part by an investment fund with ties to George Soros.

Radio Mambí and WQBA, AM stations in Miami, are two of the 18 Spanish-language stations that a group calling itself the “Latino Media Network,” run by an Obama White House alum and a left-wing immigration activist, have agreed to purchase from Univisión-Televisa for $60 million, reports confirmed by Univisión indicate. “Latino Media Network” raised its money from, among other sources, Lakestar Finance (the Soros-linked investment fund) and left-wing celebrities like Eva Longoria. The individuals leading the effort have described combatting conservative “misinformation” in Spanish as a goal of the purchase.

“Latinos are constantly trying to navigate the ocean of information. In some cases that is disinformation, in some cases that is very one-sided communication,” Stephanie Valencia, the former Obama outreach director co-running the Latino Media Network, said in an interview this week. “In the Latino community radio still plays such an important part, and in places like Florida it obviously plays a critically important part.”

The Assembly of the Cuban Resistance, a coalition of pro-democracy and human rights groups within the island and in exile, held a press conference at the Bay of Pigs Museum in Miami on Wednesday to protest the sale.

“Latino Media Network is a newly formed business venture led and controlled by social activists who espouse a leftist progressive ‘woke’ political agenda,” Silvia Iriondo, the head of the Mothers Against Repression in Cuba, said during the press conference. “In these days of cancel culture, where censorship of conservative views and values has become commonplace, we have grounds to be extremely alarmed about the imposition of an ideological agenda contrary to our community’s spiritual and moral values.”

“We have genuine grounded concerns over the silencing and marginalization of radio stations that have historically stood as voices of advocacy for freedom in Cuba and in denunciation of the crimes against humanity perpetrated by the Communist regime in our beloved island,” Iriondo denounced. “Our people have suffered too long and continue to suffer too valiantly – with their very lives – for freedom of expression, for the right to worship God, for the sacredness of life, liberty, and family for us to meekly accept any attempt towards the ideological colonization of our community.”

The president of the Brigade 2506 – the veterans of the Bay of Pigs operation – Rafael Montalvo also issued a statement on behalf of the veterans stating, “We are insulted by this action of selling our media – the media that has been actually taking us by the hand and fed our spirit all of these years – to a leftist organization.”

Orlando Gutiérrez-Boronat, the co-founder and spokesman for the Cuban Democratic Directorate, also issued a Spanish-language message to the people of Cuba to explain why Cuban-Americans are so aggressively opposing the radio station purchase.

“These two stations have been a source of objective information for Cuba, have been widely listened to in Cuba for years,” Gutiérrez-Boronat explained, “and outside of Cuba have been some of the key vehicles to denounce the crimes against humanity, the repression and the violations of human rights that that bastard regime engages in against the Cuban people. That is why we have to fight this battle because communication is key to our cause.”

“Why are they doing it? Because they have seen that they cannot beat us at the ballot box, they cannot beat us in elections,” Núñez asserted. “Since the Democrats are so out of touch and they are bleeding Hispanic support – not just in Florida but across the country – they have no other choice than to turn to people like George Soros, with his history of funding not just liberal causes, but damaging cause[s] to the very fabric of our country.”

“The governor [Ron DeSantis] and I are not going to stand by and allow this to happen without hearing the very strong voices of opposition because those radio stations are the voices of the exile community,” Núñez promised. “They know how important it is to not just communicate, but to communicate truth.”

DeSantis’s gubernatorial campaign announced targeted ad buys on Radio Mambí this week alerting viewers that it is about to be purchased by a leftist organization, urging listeners to defend the station.

“They are coming with their ideological agenda. Soros and his minions know what this community represents in the fight against socialism in America,” the ad warns. “This community will not get confused. Under Governor Ron DeSantis’s leadership Florida is standing against the corporate media and leftist disinformation.”

The Federal Communications Commission (FCC) still has to approve the sale for it to be completed. The FCC allows the public to levy complaints on its website.