Growing Number Of Economists Anticipate Recession Will Hit By Middle Of Next Year: Survey • JoshWho News

Growing Number Of Economists Anticipate Recession Will Hit By Middle Of Next Year: Survey 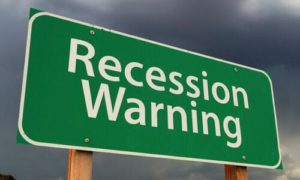 An overwhelming number of economists think a recession will hit the United States by the middle of next year, according to a survey by The National Association for Business Economics (NABE) published on Monday.

It found that 72 percent of economists polled expect a recession to begin by the middle of next year, including 19 percent of those who said the United States is already in a recession, as determined by the National Bureau of Economic Research (NBER).

The NBER defines a recession as a “significant decline in economic activity that is spread across the economy and that lasts more than a few months.”

The standard definition of a recession is also based on two consecutive quarters of declining gross national product, as has been seen in the United States.

Nine percent of economists polled say the recession will start in the third quarter of this year and another 16 percent say it will begin in the fourth quarter.

More than one-quarter of respondents (28 percent) expect a recession to begin in the first half of 2023, split between 22 percent who see the recession hitting in the first quarter and six percent who forecast it will hit in the second quarter.

Another 20 percent of respondents do not expect a recession to begin before the second half of 2023.

No Confidence in the Fed

“The NABE Policy Survey panelists are concerned about inflation and recession,” said NABE Policy Survey Chair Juhi Dhawan in a statement. “Overall, panelists are not confident that the Federal Reserve will be able to bring inflation down to its 2 percent goal within the next two years without triggering a recession. In addition, roughly one-fifth of panelists believe the United States is already in a recession, while nearly half the panelists—47 percent—expect a recession to begin by the end of 2022 or the first quarter of 2023.”

The survey results come after the Inflation Reduction Act (IRA) was signed into law by President Joe Biden on Aug. 16, and has prompted a mixed response among lawmakers and experts, some of whom argue it could cost Americans more, contrary to what Democrats claim.

A separate poll from The Economist/YouGov conducted from Aug. 13 to 16 found that just a small number of Americans believe the bill will reduce inflation.

However, among the economists surveyed by the NABE, the bill appeared to receive broad support. The bill was still being negotiated in the Senate at the time the survey was conducted.

Still, it found that 76 percent of respondents supported the $300 billion deficit-reduction goal of the bill, while 14 percent oppose the provision.