GOP Leader Kevin McCarthy Confident About Speaker Vote: ‘We’ll Get There’ Even If Multiple Ballots Are Needed • JoshWho News

GOP Leader Kevin McCarthy Confident About Speaker Vote: ‘We’ll Get There’ Even If Multiple Ballots Are Needed 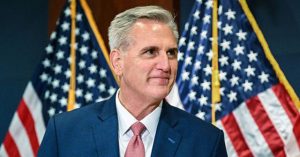 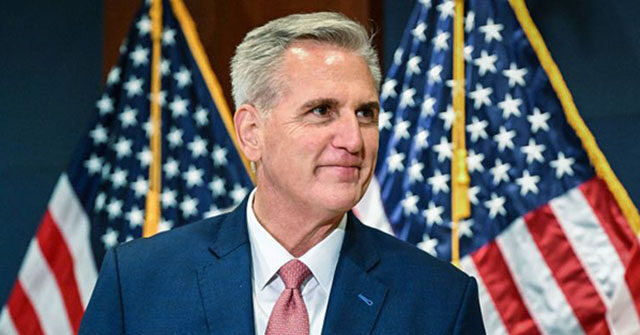 House Minority Leader Kevin McCarthy (R-CA) is confident he can narrowly win the speakership in January, even if it takes multiple rounds of voting for it happen.

McCarthy said Tuesday that if he does not reach the number of votes needed on January 3 to win on the first ballot — that is, 218 votes if all voting members are present and vote for a person, rather than vote “present” — then he plans to put up a fight to win on subsequent ballots.

“At the end of the day, we’ll get there,” McCarthy said, per Axios.

McCarthy is facing opposition in the speaker race from a small group of anti-establishment House Freedom Caucus members, who have vocalized that they are either a hard no or leaning no on voting for McCarthy.

Others in the Freedom Caucus, including chairman Rep. Scott Perry (R-PA), have conveyed an openness to voting for McCarthy, though they have indicated their support would hinge at least in part on McCarthy negotiating with them on conference rule changes.

Several members from various factions of the conference, including some from the Freedom Caucus, met with McCarthy Tuesday to discuss such rule changes.

“It was a good discussion. … I’m open to negotiating anything,” Norman said after the meeting, according to Axios. “We’ve got five weeks to come to something.”

When the GOP Conference voted this month on nominating a speaker, McCarthy won handily with 188 votes. Biggs, who challenged McCarthy, received 31 votes.

McCarthy’s 188 votes are, as explained by Breitbart News’s Matthew Boyle, “impressive” and more than former Speaker Paul Ryan received in his conference vote in 2015.

Meetings and negotiations are ongoing between McCarthy and those questioning or opposed to voting for him, but Biggs said Wednesday morning he believed the GOP leader did not currently have enough votes to secure the speaker post.

“Not where we sit today … I would say right now he doesn’t have 218,” Biggs said when asked about the matter.

Republicans won the House majority in the midterms this month, but only by what will likely be about five seats once all results are finalized, meaning McCarthy can only afford a few defectors before his chances of winning are jeopardized.