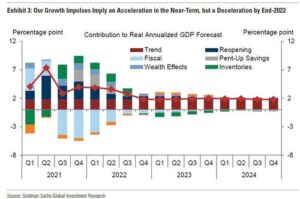 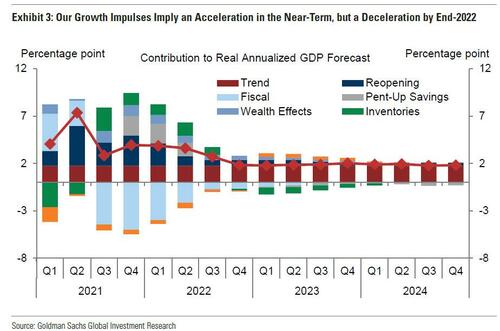 Yet despite the “big” cut, which Goldman attributed to “fiscal drag and slowing consumer spending” the bank still expected brisk mid-single digit growth because the hilariously wrong concept of ” excess savings” (alongside “”transitory inflation”) would fuel consumption for much of 2022. We disagreed completely, writing the following last October:

… one area where we disagree profoundly with Goldman is the bank’s generous modeling of an upside boost to growth from “pent-up savings” which the bank expects to offset a substantial portion of the fiscal hit. As we will show in a subsequent post, the excess savings – in as much as they still exist – mostly benefit the top 1%, with the bulk of the population benefiting from only 30% of the total accumulated amount. As such the contribution to consumption from excess savings will end up being far smaller than most Wall Street strategists predict (since the propensity of the top 1% to spend their savings which are instead invested in the market, is far less than the broader population).

We concluded saying that as a result, reader should “expect even more aggressive cuts to GDP growth in coming quarters – from both Goldman and its peers – even as inflation continues to rise, cementing a painful period of non-transitory stagflation for the US as the mid-term elections approach.“

What happened then? Well, Q1 GDP was negative (vs Goldman’s 4.5% estimate), Q2 GDP was negative (vs Goldman’s 4.0% estimate), and the Atlanta Fed just slashed its Q3 GDP forecast to below 1% and look likely to push it below zero in the coming days. But don’t call it a recession: “special economic operation” please. And yes, our major warning to Goldman’s Oct 2021 GDP haircut was 100% correct as the US is now in a painful stagflation with inflation still soaring, economic growth sliding, and most banks tripping over themselves to slash their GDP forecasts monthly if not weekly.

Which brings us to today, and – drumroll – Goldman’ latest trim of its GDP estimate which is a far, far cry from what the bank expected less than a year ago.

In a note published by Goldman’s Jan Hatzius, the chief economist who was dead wrong last year with his overly optimistic GDP forecast (not to mention repeated calls for “transitory inflation”) writes that he has raised his fed funds rate forecast by 75bp over the last two weeks, and now expect that the FOMC will hike by 75bp in September, 50bp in November, and 50bp in December to reach the bank’s terminal rate forecast of 4-4.25% by the end of 2022 (other banks have this rising as much as 5.0%). And in keeping with the Fed’s stated intention of crashing the economy, Hatzius writes that “this higher rates path combined with recent tightening in financial conditions implies a somewhat worse outlook for growth and employment next year.” 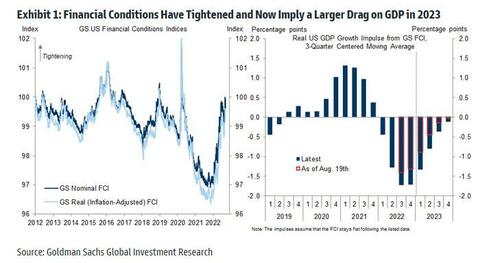 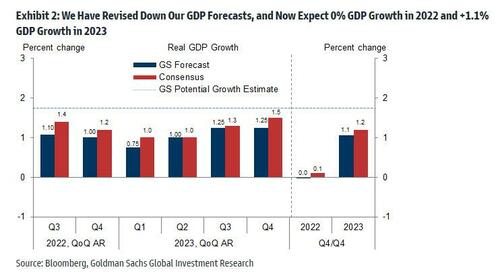 Following these changes, Goldman proudly boasts that its growth forecast is slightly below consensus (if only the bank could also reach out to its version from a year ago and tell it – as we did at the time – just how terribly wrong its then above consensus forecast would be), and implies a below-potential growth trajectory – which after all the Fed is pursuing – that Goldman believes is necessary to cool wage and price inflation.

In summary, Goldman says that while a recession is now inevitable, it will be “mild”, which of course is the “transitory inflation” bullshit spouted by every card-carrying and wrong economist last year. There will be nothing mild about the coming recession.

On its own, the higher rates path and lower growth trajectory imply higher odds of a recession, although the increase in recession risk is partially offset by an improving outlook for goods inflation and recent declines in inflation expectations that lower the chances that the Fed will hike aggressively enough to cause a recession. In addition, strong household balance sheets and an improving outlook for real income limit the odds that the economy will slip into a recession in the near-term and are part of the reason why we expect that any post-covid US recession would likely be mild. Nevertheless, on net we see somewhat higher risks of a recession following our forecast changes, and are therefore raising our odds of a recession in the next 12 months to 35%.

Bottom line: we “applaud” Goldman for again predicting that the Fed will achieve its stated goal of pushing the US into a recession (one year ago, the bank forecast 4% GDP growth, also in line with the Fed’s goal of a soft landing). And, of course, just like last year, Goldman will be dead wrong because not only is the US economy already in a brutal stagflation, but US growth will be deeply negative as soon as early 2023 when unemployment will soar and the economy will collapse, in keeping with FedEx’s shocking warning that a global recession has begun. As such we now look for Goldman’s next – and fare more realistic – GDP cut, one which will see quarterly “growth” for most of 2023 contract by 2%, 3% or more… which will serve as the moment to go long with all margin available as that’s when the Fed will finally realize that the recession its unleashed is anything but “controlled” and could well match the collapse of 2008. That’s when Powell & Co will panic, and as Mike Hartnett has taught us so well over the years, “markets stop panicking and when central planners start.”