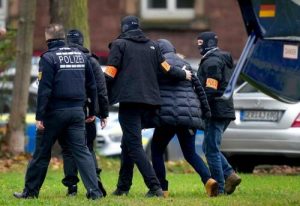 A majority of extremist-related investigations in the last year have been against Islamists, but the latest Reichsbürger case is getting around-the-clock media coverage for a reason… 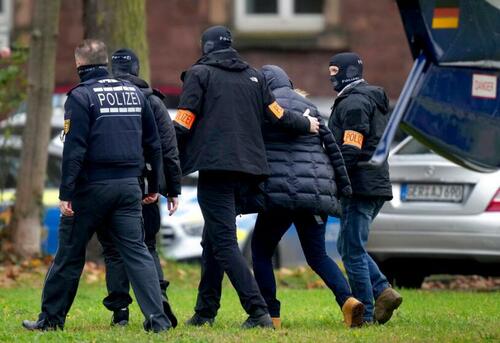 Germany saw what is perhaps its largest police raid in history, involving 3,000 officers targeting 130 properties across nearly the entire country. With 25 “Reichsbürger” suspects arrested, that amounts to 120 police officers per suspect. It was quite the show of force, and in a sign that the media knew well in advance about the coming arrests, a number of suspects, including German aristocrat Heinrich XIII and former AfD MP Birgit Malsack-Winkemann, were photographed and filmed as they were perp walked out of their homes.

It was a real coup for Germany’s left-wing government and Interior Minister Nancy Faeser, who has made it her political goal to wipe out the right. 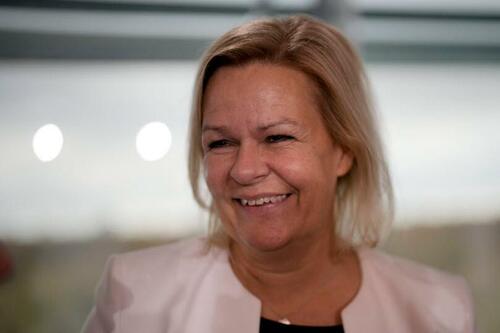 German Interior Minister Nancy Faeser has long threatened to crack down on the right. She is now taking a victory lap after 3,000 officers arrested 25 Reichsbürger suspects. (AP Photo/Markus Schreiber)

It is worth noting that nobody has been found guilty yet, but of course, even with the notoriously left-wing German media using the incident to whip up fear of the German right, the past may indicate the case could end up being more PR than reality.

The notorious “Nordkreuz” terror group, which was trumpeted by the media in 2017 as a far-right extremist network preparing for “Day X” — or the day when the group would carry out assassinations of left-wing opponents following the collapse of the German government — mostly fizzled out. At the time, politicians, journalists, and various anti-racist organizations jumped on the case, which involved up to 50 people, as an example of Germany’s growing far-right scene.

Ultimately, the Office of the Attorney General halted its investigations into the group, saying they had “no probable cause” to keep going. Like this most recent case involving “Reichsbürger,” the “Nordkreuz” group also contained a variety of individuals with military and police experience.

The supposed ring leader of “Nordkreuz” was only given a suspended sentence of 21 months, as the judge in the case said that nearly every weapon and piece of ammunition he owned was legal, and that although he had made some “unconstitutional” comments in a group chat with other members, there was no evidence he had any active plans to overthrow the government or carry out any terror attacks.

In the end, even if some members of the group “fantasized” about a Day X, there was no indication they had any concrete plans to partake in any direct action. Many in the left dream of a communist overthrow of the German government, or a society based on anarchist collectives, and some of them may even discuss what such a society would look like in various groups scattered across Germany’s cities, but would such discussions constitute an imminent threat to Germany’s democratic order?

The question is always when does fantasy start to cross into the realm of reality.

If the plan was real, it was crazy to begin with

The details from the current Reichsbürger case remain unclear, as the case has yet to go to trial. However, if Prince Heinrich XIII, who authorities deem the leader of the group, truly planned to imminently storm the Reichstag and seize power, then he and his cohorts are delusional, potentially insane, and acutely unaware of how power actually works. Power is not a capture-the-flag game where you can run into a government building and scream: “Look, now I’m in power!”

Even if the group was planning to storm the Reichstag, which is a claim we should take with a grain of salt until all the facts come to light, there is little possibility of such a “coup” succeeding in the modern era. If the group managed to defy all odds and take control of the Reichstag, the individuals allegedly involved in this case would have been promptly handcuffed and ushered into prison. After all, any successful coup requires a base of power. That means support from the military, a segment of the current elite, or a mass of the country’s populace — with all three being ideal, but the former two prerequisites far more important.

Of course, if the group was procuring illegal weapons and making concrete plans to conduct a coup, then the authorities are no doubt going to take action and are likely justified in conducting searches on the houses of the suspects, but the question will remain how far along were their plans, how many of the weapons were actually illegal, and how concrete these plans actually were.

According to media reports, there are about 25,000 people in Germany who identify with the Reichsbürger movement, a loosely defined movement but one that generally believes that the country’s current government is illegitimate and that the old monarchy was never properly dissolved in a legal manner. While some of them may be doctors, lawyers, former soldiers, and engineers, this does not represent a base of support for ushering in a new government. Many of them would also likely balk at a few members storming the Reichstag and seizing power through violent means.

We can take it a step further. If the Reichbürgers in this case actually managed to take power, all it would take is one negative report from German public broadcaster ARD and the whole Reich citizens government would promptly see an angry Twitter mob perform a reverse coup, this time with the full support of a very woke populace and increasingly woke security service. As the saying goes, China has state-run media, and the West has media-run states. The Reichbürger movement has no media, no backing, and therefore no power.

If Heinrich XIII truly wanted to rule, as the media claims was his plan, then he would have been better off taking out some Facebook ads first, perhaps explaining things a bit beforehand. Did most Germans even know what a Reichsbürger was before this case? Probably not.

Even the Islamists who dream of sharia in Germany, and there is no small number of them, are not looking to “seize power” through their terror attacks. They instead often cite revenge for Western actions in Muslim lands and sometimes sheer hate for what they describe as an atheistic and godless Western culture. For those Muslims serious about overthrowing democracy and ushering in sharia law, they openly say that demographics and time are on their side, and most hold no illusions about a band of Muslims storming government buildings to seize power. In other words, Islamic rule, if it were to ever happen, will come through the humdrum affair of “democracy.”

Fuel for a crackdown on the right

Regardless of the merits of the Reichsbürger case, the latest raid will be used to justify further oppression against the right, including of the Alternative for Germany (AfD). That means more surveillance and even more police raids. Even the notorious left-wing RAF terror group active in the 1970s and 1980s, which committed a number of high-profile murders, never had such a police response as the latest Reichsbürge arrests, but with the AfD rapidly growing in popularity, the public needs a spectacle.

The media also welcomed the distraction from the brutal random murder of a 14-year-old German girl by an Eritrean migrant in Illerkirchberg, which has once again raised questions about mass immigration at the national level and led to the city of Ulm to suspend intake of all refugees.

This is the same media that has also mostly ignored that of the 226 investigations launched by the Federal Public Prosecutor up until June 30 of this year; 131 were targeted at radical Islamists, 68 against foreign extremists, and only nine against right-wing extremists.

However, nothing should contradict the government’s narrative that the right is the “biggest threat,” and if an Islamist was perp walked out of their home in front of the camera for every terror investigation, the evening media would indeed have a very hard time keeping this narrative up.

It is also the same media that has also long disregarded the fact that the right-wing AfD is routinely subjected to assaults, vehicle arson, doxing, and in Germany’s celebrated liberal democracy, threats of an outright ban on the political party. In fact, it’s the most attacked party in all of Germany, according to government data.

The latest Reichsbürger case, regardless of how valid the allegations may turn out to be, is necessary for the left-wing government to shape public opinion of the AfD, which from a political standpoint, is the main target of this investigation, even though it has little do with the case. After all, there are just not enough “right-wing extremists” prepared to use violence to really justify the government’s claim of the right being the biggest threat. That is why the media was informed well in advance of these raids and was ready to record just in time for the evening news.

Coups are very hard in the modern age

On a side note, most revolutions and coups, which were always difficult to pull off, are especially difficult in the modern age and doubly so in Germany where — despite inflation and a souring economy — most people live in relative comfort and a deep fear of anything the media labels extreme right or even right-wing. Most of the coups that do work in the modern era require NGO funding, support from the CIA, Big Tech, and repetitious media messaging, such as the color revolutions seen across Eastern Europe and the Middle East over the last two decades.

Even in the “old days,” coups were rarely successful, and even in cases such as Castro and Che’s communist overthrow of Cuba, they were won against all odds. When Castro and Che’s ship arrived in Cuba with 81 armed revolutionaries, Batista’s army was already waiting for them. Only 19 men survived, including Castro and Che, who escaped into the Sierra Maestra mountain range and waged an extraordinary guerilla warfare campaign that saw them eventually overthrow the entire government.

Even for those who despise the politics of Che and Castro, what they pulled off from a military and propaganda perspective has rightly gone down in the annals of history. Most men would have thrown in the towel after 85 percent of their comrades were killed in the first minutes of the “revolution.”

The fact that Batista knew Castro was coming indicates informers were already in the group, or Western intelligence or Batista’s own agents used other means to know from top to bottom what the group’s plans were. This intelligence leak was before the era of smartphones and internet surveillance.

In contrast, German domestic intelligence is inside encrypted chats, they are inside people’s computers, and they are openly monitoring members of one political party but also a large variety of political groups. For those “planning” a coup, regardless of whether they are on the left, right, or adhere to some other political or religious ideology, the odds have never been more stacked against you.