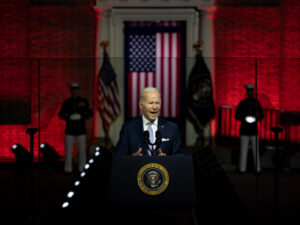 General Mark Milley, Chairman of the Joint Chiefs of Staff, has yet to comment on the use — or abuse — of Marines in President Joe Biden’s speech Thursday attacking “MAGA Republicans,” after Milley complained about Trump’s march across Lafayette Square.

Biden delivered a diatribe against Donald Trump and the political opposition in general, standing in front of Independence Hall as it was bathed in red light, and flanked by Marines who had been deliberately positioned, the White House said, in staging the address. 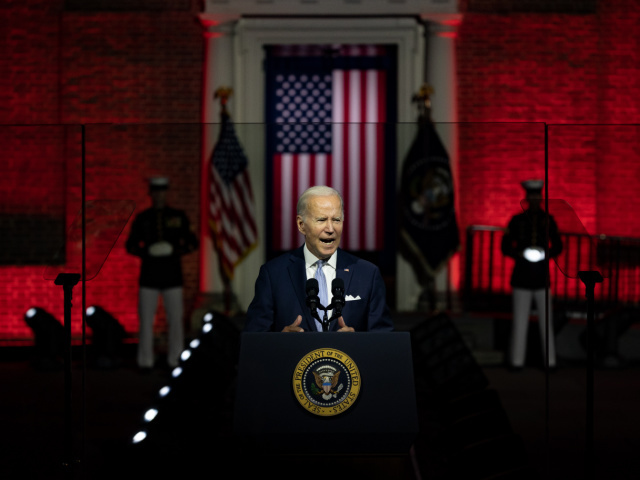 US President Joe Biden speaks at Independence National Historical Park in Philadelphia, Pennsylvania, US, on Thursday, Sept. 1, 2022. Biden is arguing that Donald Trump’s supporters pose a threat to US democracy and the country’s elections during an address billed as the “battle for the soul of the nation.” Photographer: Hannah Beier/Bloomberg via Getty Images

In 2020, Milley joined Trump in a march across Lafayette Square in front of the White House to a church that had been burned by Black Lives Matter rioters. It was a a demonstration that the elected government was still in charge of the country — not the mob.

But Democrats and the media falsely claimed that Trump had used tear gas to clear protesters from the park for a “photo-op” — a claim debunked by an official investigation — and Milley issued a statement in which he apologized for his presence in uniform:

As many of you saw the result of the photograph of me at Lafayette Square last week. That sparked a national debate about the role of the military in civil society. I should not have been there. My presence in that moment, and in that environment, created a perception of the military involved in domestic politics. As a commissioned uniformed officer, it was a mistake that I have learned from, and I sincerely hope we all can learn from.

Milley later reportedly told his staff that he intended to “fight [Trump] from the inside.” He also called his Chinese counterpart to tell him that Trump did not intend to attack China in the aftermath of the January 6 Capitol riot. Under the Biden Administration, Milley went along with plans to expel extremists and encourage members of the armed forces to read left-wing texts, and told Congress he wanted to understand “white rage.” He also defended the military’s decision to expel members who refused the COVID-19 vaccine.

While giving interviews to the authors of books criticizing Trump, Milley presided over the disastrous withdrawal from Afghanistan last August, in which hundreds of Americans, and billions of dollars in military equipment, were abandoned, and 13 soldiers died.

Milley’s silence on Biden’s use of the Marines for a political speech — and a particularly aggressive one — has been noted by observers, including constitutional scholar Jonathan Turley:

……Milley has said nothing about supplying not just the Marine Band but Marines to stand directly behind Biden at a political speech as he denounced his political opponents as threats to democracy and part of what he was called a “semi-fascist” movement.

Milley has claimed “my North Star is the Constitution.”