Tl;dr: FOMC Minutes confirmed the hawkish FedSpeak of the last week or so – Fed will push rates higher until something breaks:

Mohamed El-Erian sees the Minutes this way: “The text is as expected to a little hawkish on inflation versus growth/jobs; and just a passing reference to liquidity conditions”

Since the September 21st 75bps rate-hike by The Fed, stocks and bonds have been clubbed a baby seal while the dollar rallied and gold is flat… 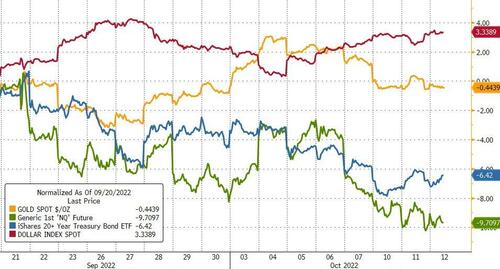 Treasury yields are 33-38bps higher across the curve since the last FOMC meeting with very little in the way or flattening or steepening from the current hugely inverted regime. 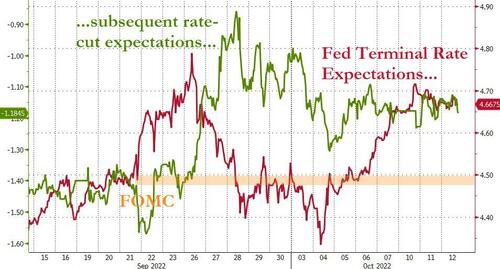 Finally, financial conditions have tightened significantly (again as The Fed wanted), now at their ‘tightest’ since the trough of the COVID lockdown crisis (and before that, the tightest since Jan 2016)… 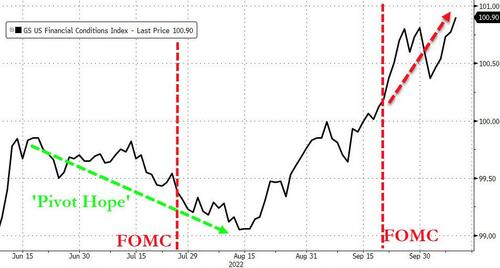 So given that The Fed appears to be getting its way with market expectations, we would not expect any major narrative surprises to be placed in the Minutes today, with traders watching for any commentary that suggests how long rates should be held at terminal for, and what conditions would ensue such a pause or even a future rate cut.

Notably, the tone of recent Fed language has suggested more hikes until inflation is confidently on its way back down to 2%, with officials pushing back on the idea of a pivot any time soon given their commitment to bringing inflation down.

Here’s the highlights from The FOMC Minutes :

On higher rates for longer:

“Many participants noted that with inflation well above the Committee’s 2 percent objective and showing little sign so far of abating, and with supply and demand imbalances in the economy continuing, they had raised their assessment of the path of the federal funds rate that would likely be needed to achieve the Committee’s goals.”

“The dollar’s strength largely reflected increasing investor concerns about the global growth outlook as well as widening interest rate differentials between the United States and Japan.”

“Most participants remarked that, although some interest-sensitive categories of spending — such as housing and business fixed investment — had already started to respond to the tightening of financial conditions, a sizable portion of economic activity had yet to display much response.”

“Participants noted that a period of below-trend real GDP growth would help reduce inflationary pressures and set the stage for the sustained achievement of the Committee’s objectives of maximum employment and price stability.”

“A couple of participants remarked that, after the process of balance sheet reduction was well under way, it would be appropriate for the Committee to consider sales of agency MBS.“

On diminished liquidity in Treasuries and in mortgage-backed securities:

“The markets for Treasury securities and agency MBS continued to function in an orderly manner, though liquidity conditions in both markets remained low, reflecting elevated interest rate uncertainty.”

And finally, The Fed also appears to be waking up to the risk it is creating…

“Several participants noted that, particularly in the current highly uncertain global economic and financial environment, it would be important to calibrate the pace of further policy tightening with the aim of mitigating the risk of significant adverse effects on the economic outlook.”

Read the full Minutes below: