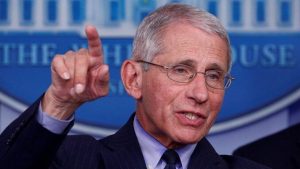 Dr. Anthony Fauci has pushed back against critics questioning his relationship with China and dismissed the Wuhan lab leak theory.

His comments came on Thursday after emails revealed the nonprofit that helped fund some of the research at the Wuhan Institute of Virology thanked the US president’s chief medical advisor for publicly coming out and saying evidence points to the coronavirus not coming from a lab leak.

Breitbart reports: Fauci advised that the email has been misconstrued and emphasized his belief that the virus originated from a “jumping of species.”

“[T]here are some of your critics who say this shows you have too cozy of a relationship with the people behind the Wuhan lab research,” “New Day” host John Berman posed to Fauci. What do you say to that?”

“That’s nonsense,” Fauci replied. “I don’t even see how they get that from that email.”

He added, “I have always said, and will say today to you, John, that I still believe the most likely origin is from an animal species to a human, but I keep an absolutely open mind that if there may be other origins of that, there may be another reason, it could have been a lab leak. I believe if you look historically, what happens in the animal-human interface, that, in fact, the more likelihood is that you’re dealing with a jump of species. But I keep an open mind all the time. And that’s the reason why I have been public that we should continue to look for the origin.” “You can misconstrue it however you want. That email was from a person to me saying ‘thank you’ for whatever it is he thought I said, and I said that I think the most likely origin is a jumping of species,” Fauci continued. “I still do think it is, at the same time as I’m keeping an open mind that it might be a lab leak.”

Fauci went on to say it is “far-fetched” and “far out” to think Chinese leadership “deliberately engineered” something dangerous enough to kill people, including their own people.

“I don’t remember what’s in that redacted, but I mean, the idea, I think, is quite far-fetched that the Chinese deliberately engineered something so that they could kill themselves as well as other people. I think that’s a bit far out, John,” he declared.