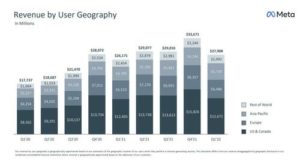 Heading into today’s earnings from social media giant Facebook Meta (technically, the second quarter since the company changed its name), markets are on edge after the recent dismal results from Netflix and yesterday’ Google fiasco, which prompted some to ask if the advertising business is hitting a speed bump, one which would have clearly negative consequences for Meta, which has achieved the impossible and is equally hated by both the right and the left. That said, at the end of the day, it’s going to come down to one thing: the company’s MAU/DAU growth, or lack thereof. Everything else is mostly noise.

To be sure, after last quarter’s epic devastation which saw the stock crater 20% in its biggest post-earnings drop on record, it appears that many investors were already preparing for the worst with Meta shares were down as much as 6.6% on Wednesday, with the Facebook parent dropping to its lowest level since April 2020 ahead of results. The day’s weakness came after a stray Bloomberg headline erroneously reported a much lower guidance for Facebook than expected. Meta shares are down nearly 50% thus far this year, making them the fourth-worst performing component of the Nasdaq 100 Index.

And while investors will be listening closely to how the company details its business environment, many would also love to know what Zuckerberg thinks of the Elon Musk-Twitter deal, especially since there is no love lost between Zuckerberg and Musk, or Jack Dorsey.

So with that in mind, here is what Facebook just reported for Q1, and why the stock is soaring after hours: 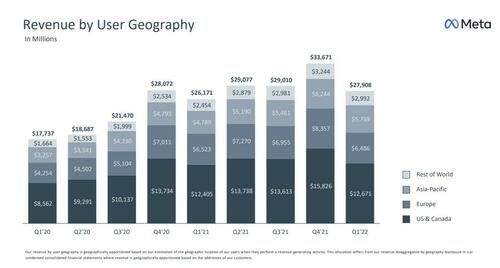 Why the revenue weakness? Well, the ad sales environment – as Google indicated yesterday – is getting more difficult: there’s the war in Ukraine, the Apple privacy changes that make it more difficult to target ads effectively, the supply-chain issues affecting advertisers, and inflation.

One reason why the stock may be soaring after hours is after shrinking last quarter, US DAUs once again grew, from 195MM to 196MM, along the broader improvement in DAUs. That said, Monthly Actives missed by a fraction by few care about this particular metric. 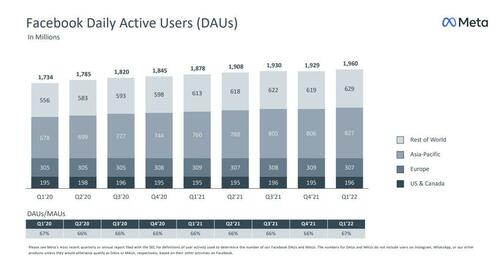 ARPUs were up in the US and worldwide, but dipped modestly in Europe. 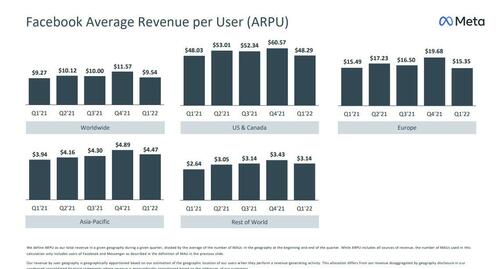 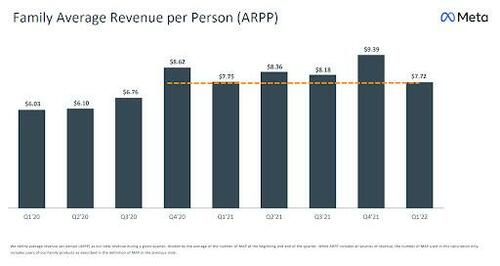 The average revenue per person hasn’t been this low since Q3 of 2020. While that chat could be Apple’s rule changes in effect, it could also be about the fact that Meta is redirecting a lot of its users’ attention to Reels, their TikTok copycat. That’s become a fast-growing format for Facebook, but the company doesn’t make as much money off of those ads, because advertisers aren’t used to it yet.

Last but not least, the company guidance. Here there was also some weakness, with the top end of the range missing consensus estimate sif coming higher than the earlier “leak” today.

Some more details from the release:

While perhaps displeased by the weakness in revenues, investors will be pleased that Meta reduced its expense guidance. As Bloomberg notes, there was a lot of skepticism that Zuckerberg would be able to fund his grand visions for the metaverse on a dying social network. But it’s not dying, apparently, and it’s not as expensive.

Commenting on the results, Mark Zuckerberg said that “we made progress this quarter across a number of key company priorities and we remain confident in the long-term opportunities and growth that our product roadmap will unlock,” he said. “More people use our services today than ever before, and I’m proud of how our products are serving people around the world.”

And unlike last quarter, when FB cratered by the most on record after an earnings release, this time investors have exhaled a collective sigh of relief and sent FB stock surging more than 10%. 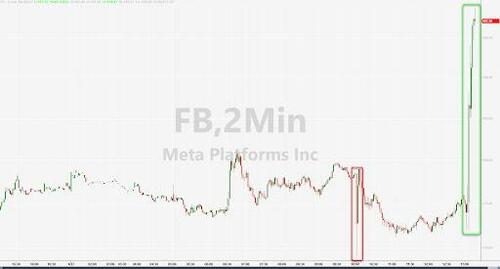 According to Bloomberg, if this share-price jump of 12% holds through Thursday’s close, it would be the biggest post-earnings advance for Meta since the company reported results for the fourth quarter of 2015. That said, coming into today’s report Meta shares ended Wednesday’s session at the lowest level since April 2020. The stock has shed more than 6% in the past two days and is down 48% this year through the close.